The Doomed Bird Of Providence - Will Ever Pray 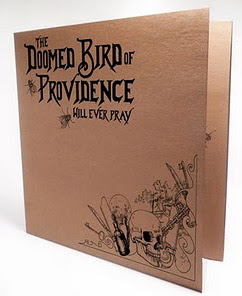 This flows with a sadness akin to Matt Elliot’s drinking songs, those upright piano bones throwing woe through a salty squeezebox exhaustion… A certain Cave-esque atmosphere in the spoken embers, that rugged gnaw of a vox giving me proposition type connections, vivid tints of 19th century hardships… The first track's spidery chords setting the scene... bowing out on a lush violin screech, like the sting of hemp burnt palms … those tightening notches reminiscent of noose holds…

Lighter melodies counter the prevailing dirgy vibe, an addition / subtraction that goes on throughout as the narrator relates his grisly tales… When track three’s percussion sounds akin to a detached appendage lazily slapping a lifeboat’s side, it’s tied up by a sparkling meander of guitar... a flourish that rises above the solemnity … Later, a quickening harpsichord swallows the bodhran skin and funeral piano to the same effect, in fragments of moonlit madrigal. A Gilmore-esque electric guitar strengthening the refrain momentarily… until that squeeze box exhale reclaims it’s grip and hope flows through your fingers like sand…

The second half focuses its attention on a nautical massacre… real or imagined spread over five parts... though the body count doesn't stack up to Stagger Lee or O'Malleys Bar proportions the atmosphere is lovingly sordid with instrumentation authentically lamp lit.

A catastrophic fog of a violin/squeezebox drone starts part one... gathering its wares to a deliberately pensive horizon… Pleasant melodies flow over this deep underbelly... teasing you away with a double bass sucking at the tension, letting it flow in regulated chunks… fading nicely to muted wave breaks.

Further on, a Parisian accordion and sea-shanty shin slap introduces the
murderous deed with Pogue-esque glee…...with the next track documenting the throat slashing with an appropriately hollow sounding sinew of guitar, clipping the sanguine motifs swimming over it... as the Captain's sticky entrails are spread over the decking.

Later a two finger piano drips casually through rigging, as sweeter melodies spur off that accordion and bass combination… float around like drowned girls hair… bounding out on musical box spans… a beautiful lament that bleeds into a popular nautical motif that ends the album… this seems a bit throw away until reverb sends it into the past tense and a crashed wave kills it stone dead.
front and follow the doomed bird of providence