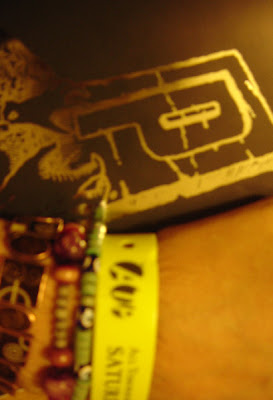 Oneida – hit a real Krautrock trip, a hypnotic repetition which left me smiling inanely throughout their entire set – superb! 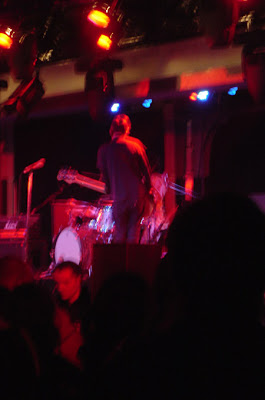 AutoLux – sported the best girl drummer I’ve seen in years and a sumptuous vocalist to boot, her spikes laid into the dirty bass and gnarly guitar. My internals were rearranged by a steady speaker thump which made me almost bring back my mushy peas. The feedback shapes the bassist was making scarred the mind beautifully in Pollock like splashes. 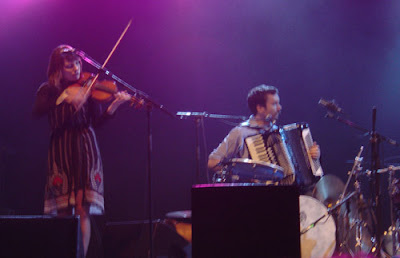 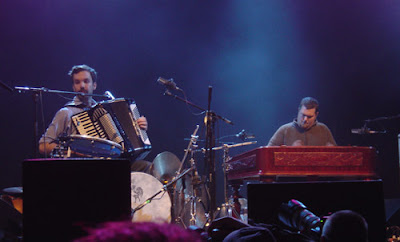 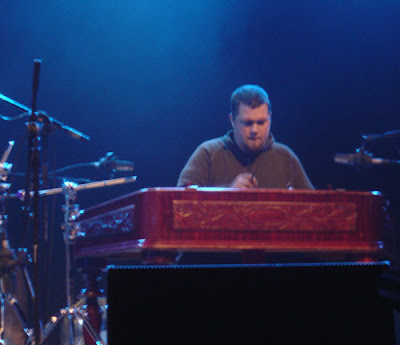 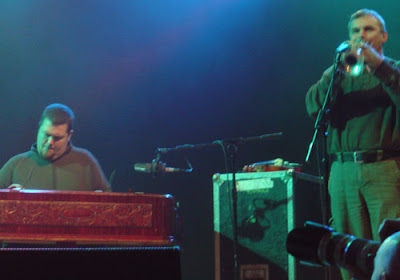 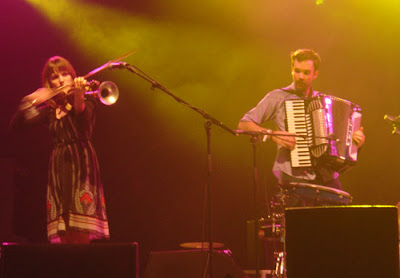 Hawk and Hacksaw - Employed two extra additions to their group - and boy, this was without doubt the best I have ever seen them. Lots of different tones in there, dulcimeric hammering, with astounding trumpet, breathing its silk over the violin / accordion / percussive whole – saturated, Eastern… gorgeous. The dental floss violin playing was a nice touch too. 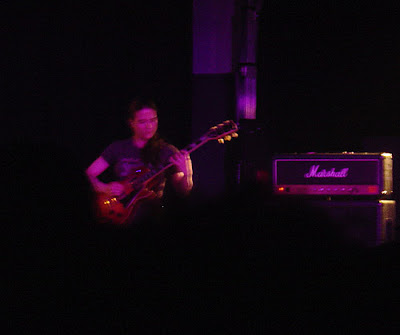 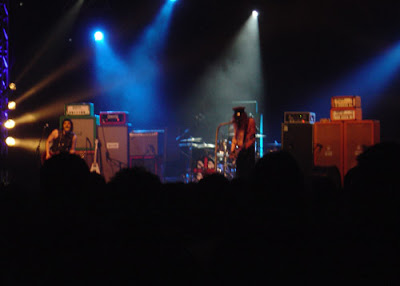 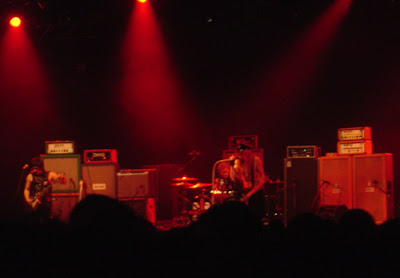 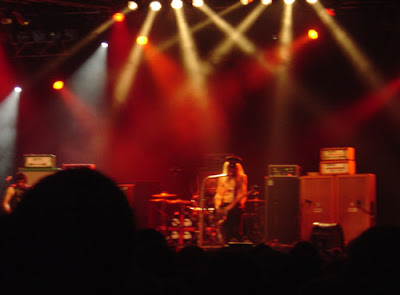 Julian Cope – Loved this guy, growing old disgracefully. Stage full of vintage speaker stacks… this man really knows how to rock. Big, bulky and super-charged, with some ‘Tear-Drop Explodes’ being thrown in there, suitably skewered of course. The new material really did sound agreeably lush and sprawling - Must get myself a copy.

Portishead – was the only gripe of the day, for some reason only silver wrist bands were allowed in – why!!! We had no idea, not a peep about it in the time-table. 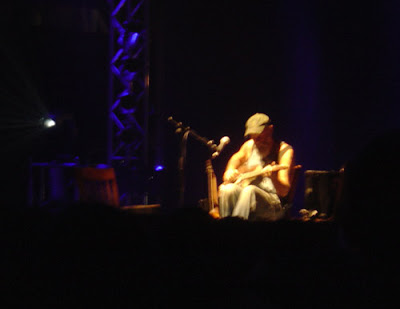 Watched Seasick Steve instead - a super amped blues delight, his one string Diddley Bow (of Bo Diddley fame ) carving up the disappointment...

I was feeling pretty ropey at this point, my lumbar region feeling the strain of standing up for more than 8hrs. Eyes feeling like clay stabbed holes - exorcising the evil sensations onto paper – the scribbled self portrait (suitably rough n ready) worked a treat – left me feeling mysteriously better. 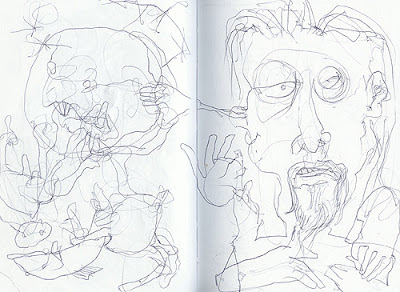 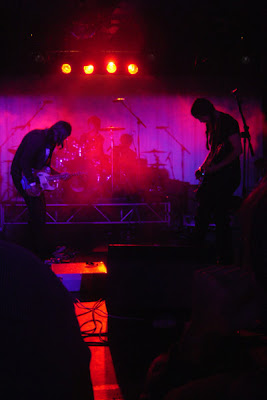 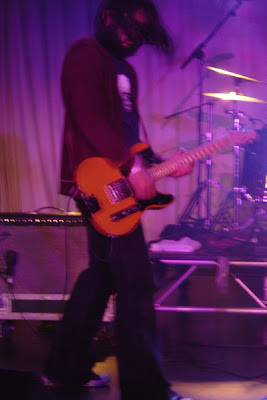 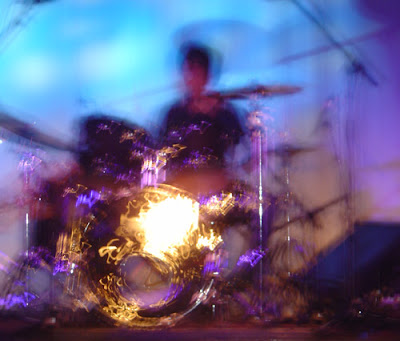 After a quick burst of the ‘The Heads’, it was over to the Red Stage to catch Thought Forms, who gave a really enjoyable set. Slow starting from a carpet of ether forms and magnetic instability, festival nerves and a few technical problems were thoroughly dispersed as the guitars and drums fused together pleasingly. Song riff’s steadily grew in intensity, quickly released to colourful slaughter. 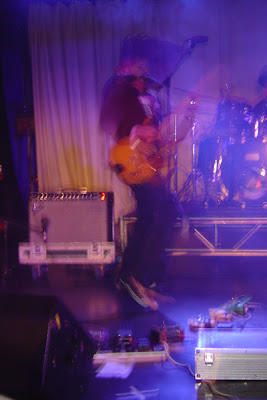 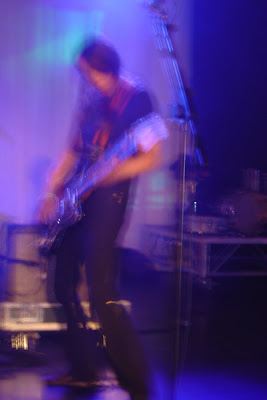 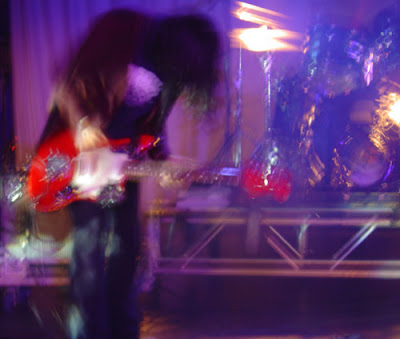 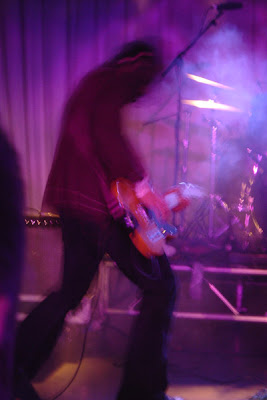 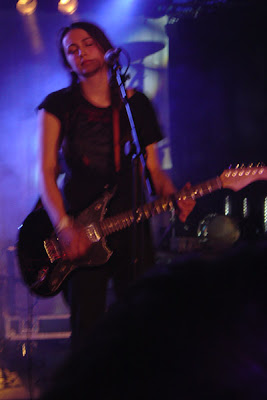 Deej and Charlie throwing themselves around the shapes, the drums forging a path, flash lit. Really loved that ‘we would be so happy’ track that ended the set - the vocals creeping over those spangled guitar lines, sedately acknowledging a storm was a brewin , slivers of expectation then licked knife capillary blister, grrrrring guitar filling your head with plucked butterfly wings, something pictures will always fail to capture. As Mr Olivetti put it earlier in the day – this is what life’s all about… 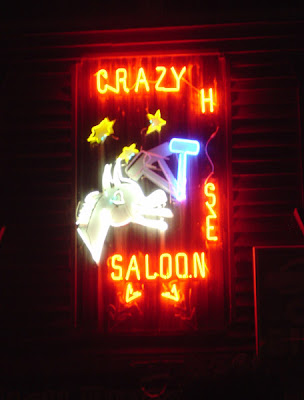 doppelganger said…
Hey, that's a duff deal about Portishead... i guess there must be folk who went just for them...
Sunday, December 09, 2007

I am not Kek-w said…
I expect they did two sets over the weekend - on 2 different nights with differnt coloured armbands....that's what they did w/ The Stooges and SY last year
Monday, December 10, 2007

Anonymous said…
Ha this may be because Nick Cave said earlier this year (at the Dirty Three curated one) it was kinda silly to play 4 sets (2 Cave/2 Grinderman) on two days for the same people... Which wasn't true because it gave me the opportunity to see other stuff...

Little tip because she was fun and musically messy: Weyes Bluhd...
Tuesday, December 11, 2007

Cloudboy said…
Ah, that makes sense... on Sunday night, I just happened to be looking up through the skylight and this massive skull made from clouds was looking down at me – been spooked out ever since.
Tuesday, December 11, 2007

Anonymous said…
HAHA... Clouboy being afraid of Skullcloud. Sounds epic. Have you thought about animation? You could make a fortune with such a story...and the merchandising of course ;)
Wednesday, December 12, 2007

Cloudboy said…
under a skullcloud... something sonic this way comes.
Wednesday, December 12, 2007