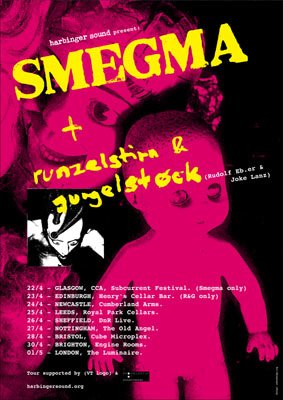 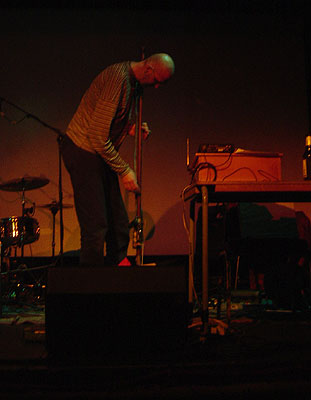 The solo Deepkiss 720 warmed us up with some agreeable noise –his throbbing stick bass conversion lacerating in unearthly reverb, producing a sound that shook your insides and opened your mind up with its roughly finished rhythms. Floor bound boxes endlessly twisted and contorted the sound into delicious shapes, which he further refined using hand-held jacks. Liked the beheaded doll head with flickering horns glowing satanically on the floor...

Brutal, awe-inspiring but too bloody short … left with the feeling that I wished he’d used his voice more as on this video clip courtesy of YouTube...

but splendid show of strength all the same. 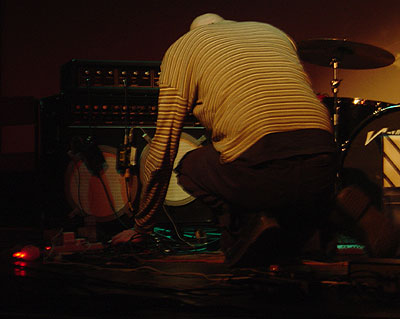 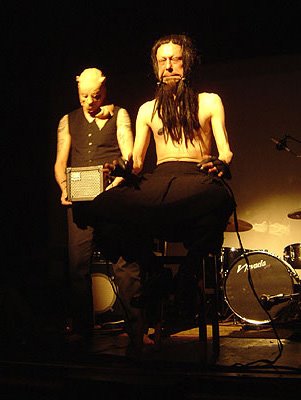 Runzelstirn + Gurgelstock be warned if you enter the world of these guys be sure to enter with an open mind, as they take their collective performance art to a very disturbing / sickening place indeed, as clicking on the 'aktionen' section of the above site will demonstrate. (Don’t go there if you are easily upset – some of this is pretty extreme).

I wasn’t sure what to expect, fearing that me and DJ Baz were too close to the stage as bodily fluids are often used in their performances. Thankfully the auto-vomit chorus was restricted to the screen alone (an actual video of a event in Kobe Japan). It still was ‘to pardon the pun’ sickening in both vision and sound, with a lurid buzzing of flies that continued into the rest of the show.

An ominous feeling grew, made no better when the duo graced the stage, one wired up through his mouth and arms, pressing a number of noise switches attached to his latex gloved hands- every time to a tortured grimace, as if the electrical charge was being absorbed bodily. Joke Lanz (Sudden Infant), latex masked, wandered the audience offering the most blood curdling screams in between the cut-up noise out-bursts Rudolf Eb.er (Schimpfluch-Gruppe) was creating.

Sound wise it was deliciously sparse and explosive, with the wired man’s expressions casting a scary hue. Sat centre stage, his eyes rolled white, mouth bizarrely stretched Maori warrior style, motionlessly psyching us all out – Shit the atmosphere was so tense I could hardly pluck the courage to photograph it, thankfully DJ Baz whispered in my ear take a picture so I obliged, at which point both stared threateningly back (check the below pic) - Chilling stuff!

Check out the disturbed artwork. 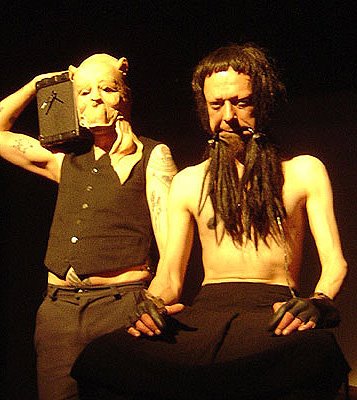 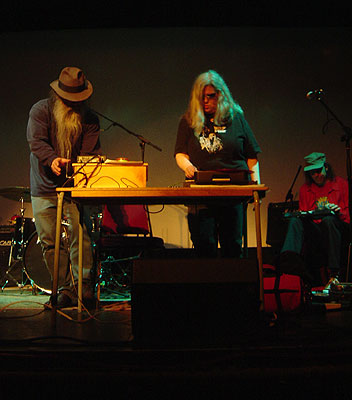 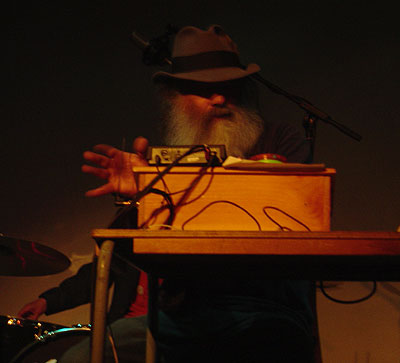 Smegma were fun, and tremendously tuned into each other, as you’d expect from over 30 years of playing together (for the most part).

Strange sounds floated round from their Frankenstein collection of odd instruments, novel shapes that formed into amazingly rhythmic slabs of sound that were foot-tapping(ly) great. At times, quiet and reflective, at others driving a monstrous howl of jazz/funk/punk fusion, Smegma really cooked up a heady brew with loads of things going on in the sound - too numerous to mention in detail. Loved the spacey harmonica, created from what seemed to be a humble elastic band; that Theremin vibe was the winner too with plenty of scratchy record sampling ( loved the ‘Marijuana is the flame , Heroin the fuse and LSD the bomb’ loop) and bastardised toy action - they rightfully deserve their place on the free-noise throne. 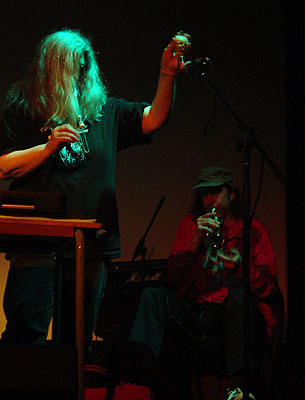 I am not Kek-w said…
Would really liked to've checked this out (and also tonight's Dubstep mega-bill), particularly Smega (check their team-up w/ Wolf Eyes) but stuck in Yeovil on child-care duties; can't even get up the pub this w/end. *sigh* Shouldn't complain...I did get out and about a fair bit last month...
Saturday, April 29, 2006

Cloudboy said…
Hiya lovely to hear from yer... funny enough - she (the turntablist from Smegma )was wearing a wolf eyes t-shirt on the night - hopefully my little piece and pics are some consolation... i'm feeling rough now though as the kids got me up at 6.30am

Anonymous said…
I heard these guys were breaking up!! I hear that Juk Suk and Jackie kicked out the bass player and the drummer. Say it isn't so!
Saturday, September 01, 2007

Anonymous said…
Hi DK720 here. Thank you for the review, sadly i was not able to get into my set at all on this night. I think i'm getting quite hard of hearing and like to "feel" the bass which wasn't possible at the cube. I knew what was coming and figured the shorter i did the longer Smegma would do, they did my favorite set of the tour in Bristol.
Saturday, April 11, 2009