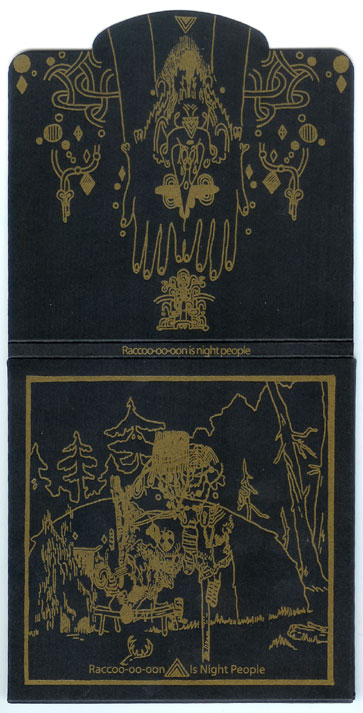 This was Raccoo-oo-oon's first record (well tape to be more precise) recorded back in 2005, and originally released in an insanely small edition that was unsurprisingly swallowed up by an eager public.

Fortunately for the rest of the world, the Swedish label Release the Bats has gone and done a splendid job of resurrecting it on CD, and going that extra mile by coating it in a gobsmackingly beautiful package that makes the candy inside taste all that bit sweeter. Shawn Reed‘s lush gilded symbolism is set off superbly by the burnt olive stock like ancient rock art rivers of consciousness caught in the light of a dying sun.

The music is an odd mix of shamanic work-outs and tainted indie rock with a slightly catchy rhythm under pinning most tracks. A smearing of tune that wobbles uneasily in the half-light with guitars, drums and choruses that are never too far from the ritualistic. A splattering of quirky/mystical electronics wraps it all up nicely.

Loads of tracks stand out on this short(ish) album, but tracks 2 and 4 really push my buttons. The latter starts off all powwow tomahawk feathers, a mixture of trance like mantra and intoxicating sonic gases that unexpectedly explode in colour as if a carrier bag full of paint had been disembowelled. A morphic tangle of arms reaching for the starry sky amongst a flame-thrown forest glow - I really wanted this one to go on forever. If I had to pick one track, though it would be track two - ‘Uh-oh’ with it’s anthem like beat, spangled guitars and muffled vox that alters into animal calls on a tide of amusing bed spring / pinball electronics - just the ticket to ditch that depressing January vibe, and I’m betting this all sounds even better live. 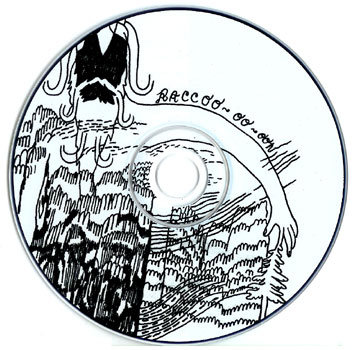 Anonymous said…
this is what happens when hardcore kids finally get around to psych, everyone else can tell you don't mean it dudes, quit pretending. howabout trying to actually write something that adds up and says something beyond some nonsense quasi native american bullshit chants that some arty, white 23 yr olds who forgot to shave for a couple weeks would call music. i can't wait for this trend to be over.
Monday, February 26, 2007

Cloudboy said…
...as for the scene I think it’s still evolving, mutating and is far more than a just a fashion option. For me Raccoo-oo-oon seem to be taking it from an interesting Indie perspective, without pretension or jumping anybody else’s train and for a first recording they’ve done a great job of it.
Wednesday, February 28, 2007

Unknown said…
I live in Iowa City where these guys are based from and have had the pleasure of seeing them several times. The music is MEANT to be heard live for starters...or at least really loud if you can't see them in person. They are probably one of the most popular/original local bands in this town of endless indie genre crap that the previous reviewers apparently think they should conform to.

What are you? Some kind of mutant bubblegum pop music whore? Why not save the world from your useless opinion and just kill yourself. The world music community will thank you for no longer being a detriment to legitimate music exploration and experimentation.

"everyone else can tell you don't mean it dudes, quit pretending. howabout trying to actually write something that adds up and says something beyond some nonsense quasi native american bullshit chants that some arty, white 23 yr olds who forgot to shave for a couple weeks would call music."

Can they? I suppose everyone in the world shares this same one dimensional half baked opinion in your world view? One that is devoid of any merit because you can't bother to think outside the box you put yourself in, you fucking closeted self loathing degenerate music nazi.

Cloudboy said…
yep , i agree with yer totally Justin - Raccoo-oo-oon are awesome especially live, only left those anonymous n crappy comments up because i didn't have the heart to delete them.
Saturday, July 21, 2007

Unknown said…
Yeah I figured. Everyone is entitled to an opinion, some are just wrong. In this case it's the latter for those two.

Personally, I could do with some more nonsense quasi native american bullshit chants.

It's funny you mention shamanic work outs...thats the EXACT same thing I thought the first time I saw them perform...kind of like running a marathon on mescaline.
Sunday, July 22, 2007

Unknown said…
I will be seeing these folks again tonight. I think it could be one the their last shows, supposedly some of the members are moving elsewhere after a possibly upcoming euro stint...it will be sad to see them go.
Monday, October 29, 2007