Christoph Heemann and Nurse with Wound

Christoph Heemann's set was too minimal for my tastes, but had some interesting drone shivers. The first half of the set concentrated on the ambient side of things, the second half peaking with some lovely colours, as small changes were made almost zen –like to the mix. It was wonderful to hear the whole entity shifting around but visually it was a bit dull. Closing your eyes and drifting along was preferable, as the sound took on an elevated, amorphic shape in the mind’s eye something I guess Christoph was after. I liked the subtle traffic noises - the only recognisable human reference in the alien un-empathic machine code. 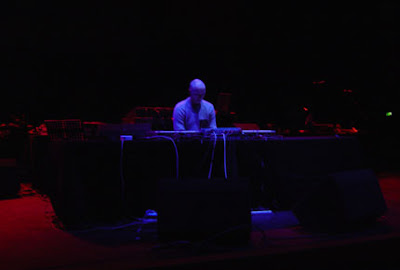 The Nurse set was a fabulous amble (approx 1hr 40) through some back catalogue re-shuffles. Slow drones built into a contorted mass of creaks, explosions and noisy detours from all members. The screen action was really strange, mirrored bodies and reflective vaseline like contours breaking into diamond-like trickles of light . 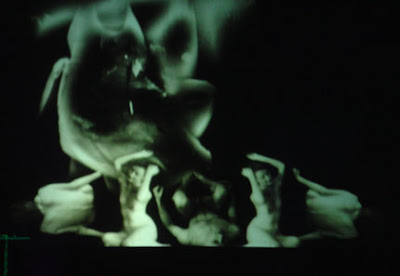 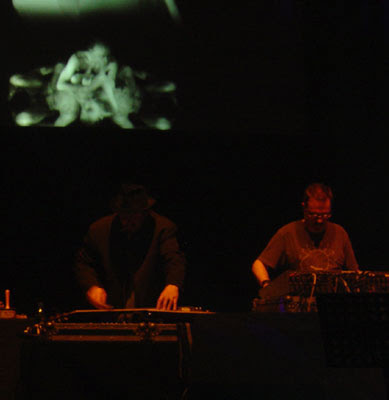 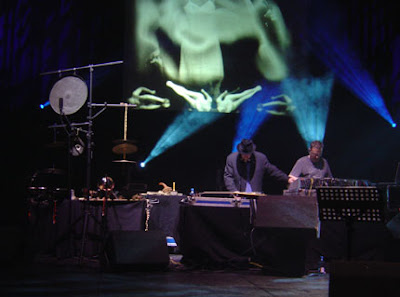 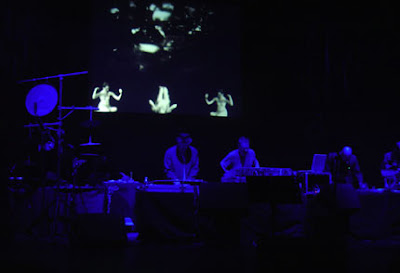 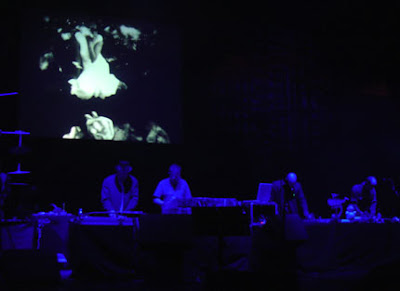 Marcus produced some interesting percussive counterpoints, that somehow gathered together to produce a semi distinct Dead Side of the Moon. Tibet graced the stage bare foot and gorgeously stuttered the vocals whilst creating a mix of dramatic posturing and insane enthuiasm, whilst Stapleton bowed a guitar. ‘The moon is deaddddddddddddd', Tibet cried in sibilate projection. 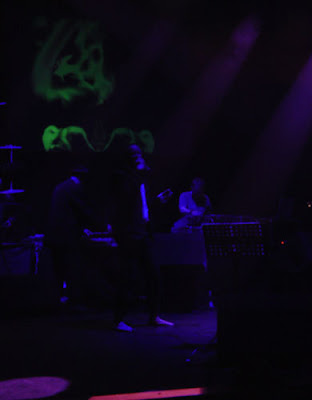 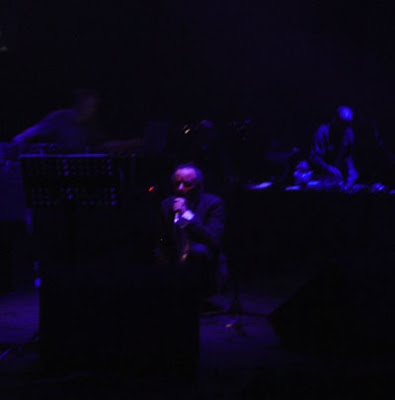 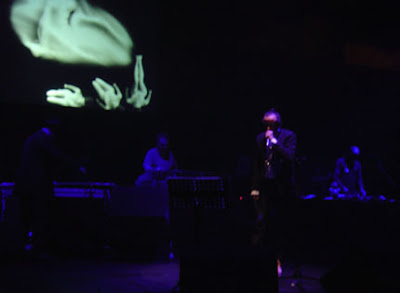 As the sound shifted on, Tibet, bottle in hand, retired from the stage and the Nurse set moved into unknown territory. So much was happening, I couldn't begin to recall in infinite detail, but at one point Steve was doing some interesting scratching and DJ shenanigans. Matt Waldron’s toy collection was fully exploited with a latex gas mask improv that succeeded to be both comical and sinister. 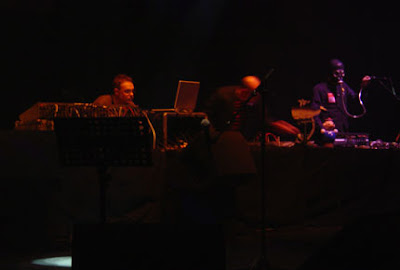 At points the sound detached from its multi strands of drone to break into some lovely beat led works. Matt went straight into some crooked Blues song rendition, while hitting his head with a small hand drum... Something about ‘whooping under the board-walk’ with great use of expletives, he had a great voice, something that was a pleasant shock to the system. After another eerie subdivision, recognisable beats materialised which gathered momentum and Tibet returned. Mentally energetic, he threw himself into a re-work of Two Shaves and a Shine almost spitting the lyrics out, my face was a fixed grin, eyes taking in the pure majesty. 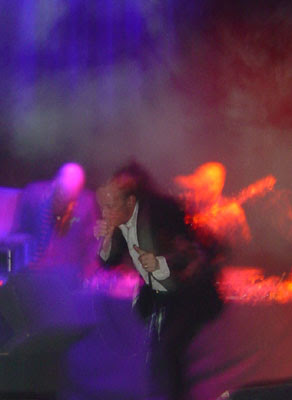 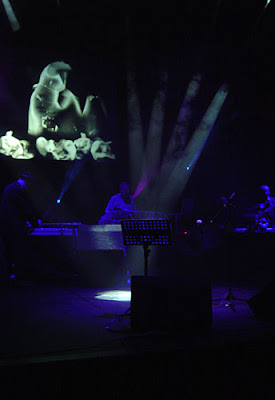 For the final furlong, a restructuring of Salt Marie Celeste was their offering, with Liles’s whale chomping, Matt’s toys, tuning fork and tinkering, cutting across the creaking drone of the heavy water shifting swell, I’ll never get bored of this song’s aching loneliness. 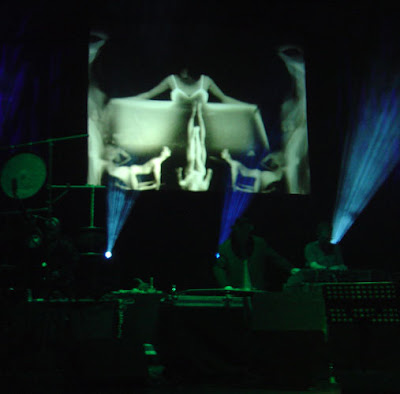 When the whole finally came to a grinding halt and the team left the stage to enormous applause, you just know an encore was out of the question.

Definitely a value for money show and something that will remain an untouchable experience for some time to come. Bloody suu-perbbbbbb. Witnessing a lunar eclipse outside was the crowning cherry as the moon turned suitably crimson-like and menstrual (could almost feel Tibet grinning) .

I have now formed the plan to take a little vacation in June and try and catch them in Paris...and maybe even Brussels
Monday, March 05, 2007

Cloudboy said…
Rafeal - cry, me too when I found that no music was for sale in the foyer, only tees and old posters from the 06 American shows neither of which peaked my interest.
Monday, March 05, 2007

Cloudboy said…
If you get the opportunity go for it, would be mildly interested in now different each show would be.
Monday, March 05, 2007

Anonymous said…
ahahaha...I remember telling Thirlwell, after two Steroid Maximus concerts, I liked it when they played stuff differently each night that he reacted a little shy and mumbled something about stuff not going the way they were supposed to...
Wednesday, March 07, 2007

Andrew Clegg said…
Loved the review. Reflected my own experiences well---although I'm a bit embarrassed I didn't think of "In Menstrual Night" while watching the moon go red.

Does anyone have a clue if Matt Waldron's blues number has been recorded anywhere?

Cloudboy said…
thanks andrew - always touched with any feedback i get - it was great to see tibet and stapleton together again. Think Matt's releasing a covers album soon(ish) over on Beta Lactam Ring - which is probably going to be as crazy n entertaining as his ABBA venture.
Sunday, March 25, 2007