All acoustic over at the folkhouse 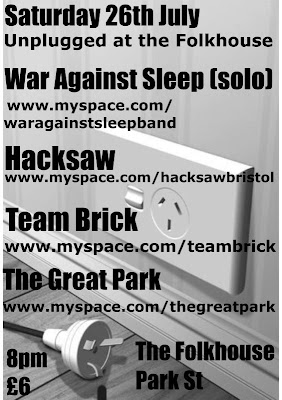 Leave your ear plugs at home and come to the Folkhouse for a rare entirely unplugged show. No Amps or PA in site!

War Against Sleep (solo)
Having just released a new LP entitled 'Pleasure Complex' War Against Sleep’s Duncan Flemming appears at the Folkhouse for a rare solo show. Duncan is a genius of a songwriter walking a razor sharp tightrope between deranged humour and classic pop music. War Against Sleep is his ongoing battle against the absurd waking dream that passes for life, in which he plunders the hidden treasures of a thousand charity shop records, writing songs that tingle the spine, move the soul and lift the spirit.

Hacksaw
Local bog roll throwing, football anthem writing punk rock two piece appear for a rare unplugged show. There is talk of biscuit tin percussion, but aside from that expect a fun filled set of unexpectedness. The band describe themselves as a ‘no-talent geriatric punk rock band’, but don’t let that put you off!

Team Brick
Bristol noise monger signed to Invada records leaves the pedals at home for a piano centred set. ‘Live spontaneous joy-noise filled with throat singing, pedal-chain manipulation, song in the form of bellowed prayer and any number of instruments and found objects. A significant exception to both the timid floundering of improvised experimentalists and the stereotypical noise musician, Team Brick's live sets are eventful, intuitive and almost impossible to ignore.’ (ents 24)

The Great Park (solo set from gentleman from Blanket)
Stephen Burch's alter ego The Great Park began when he went to stay in a remote farm in southern Ireland. The music is built on a finger-picked vintage acoustic guitar, giving a threadbare backing for his densely-packed lyrics following the folk tradition. He has released a number of recordings through Brighton-based label Woodland
gig news