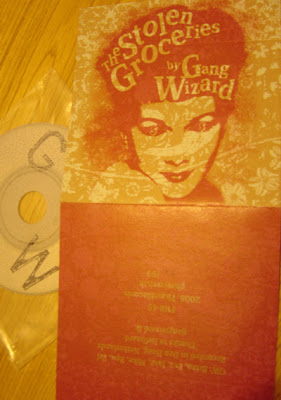 Gang Wizard never fail to put a massive smile on my face, not to mention the bizarre wire wool animal fights they fill my head with. This teeny disc available from Phase! captures a 22 minute snapshot of incendiary and insightful primitivism from the band, recorded live in Holland back in June 2007. Entitled, The stolen groceries, it’s how live recording should sound - a riotous free fall that blindly goes where it feels it needs to, and makes no apologies for doing so. Those fucked up convulsions of drumming, grafted to overfed squeally death throes are priceless, tuneless explosions peppered in dents of narcked-out eagerness, somehow they grasp at a crooked notion of melody, buried under all that white eyed mania. Churning up plenty of abnormalities from their bruised and battered instruments, the band carve up the place in a post-apocalyptic fury, as screaming fills your ears with incoherent garbage, like some lab animal foaming through its muzzle…even the quieter bits shake with a simmering insanity that verges on the delightfully scary - gorgeous packaging too...
gang wizard mini cdr music review phase