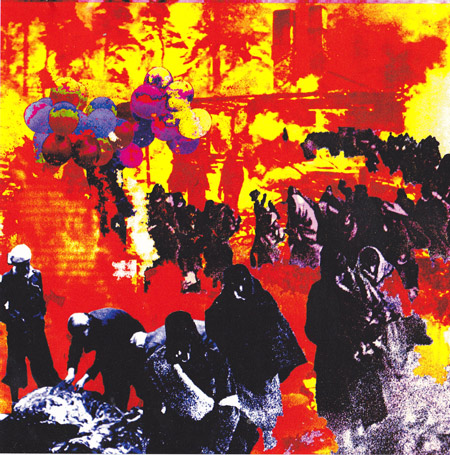 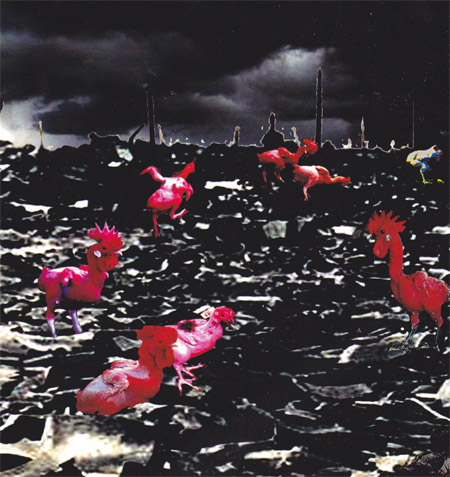 The first track Quicksand Eggs of a beaten Pathos clocks in at around 30mins, starts off like the Residents at their most jovial… a comedy of bendy melodica that falls over into full on brutalism bullied in percussive kicks and hints of piano storms… It’s a baptism of fire, a swarm of digital insects gnawing at your grey matter, but your skull isn’t pummelled for too long before your endurance is rewarded with a drone bed of sinister Neubauten-esque DIY ‘s and hammered piano amputations… Some great sequenced candy follows, eking out ill-omens, organ lines thrown over grumbling discomfort… mad trebly can openers hooking at the debris like those red roosters dancing over a post nuclear diorama on the back cover… that reverbed intensity and smashing percussion is something else… quasi glints of a goose stepping clout, like some digitally distressed hybrid of Test Dept and Laibach… breaking away in an unpredictable feast of drum patterns and textural quarrel, chugging out those asymmetrical highs and BPM runaways … It's as if the band Ruins has been replaced by a dominion of broken robotics and sputtering dot matrixes and cattle prodded into spastic action…

Ideas flash by at a bewildering speed, everything evolves with amazing fluidity, spurs off in freshly inspired directions... never for one minute remotely boring... at one point Arvo even seems to be redefining drum and bass in fist fighting billiards and Wurlitzer panel punch… This is a bit like those Venetian Snares but way more berserk with the tempo, and homicidal in the collisions.

The second track Deadbeat deluxe is as possessed as the first, a mad assemblage of avant mangled hilarity and butt slapped S&M with some tasty Nintendoed Kraftwerk, propping up what sounds like a shoulder smashed garage door before it slips into all out industrialised glee … An intensity that’s later cut back in sparse percussion, only to launch into a junkyard techno of mortar beat and cracking schism … further machine gunned into a grainy post existence of unrelenting ear knives … cut-up in a mud slapped finale of punched hydraulics some 16(ish)mins later.

The last track Plasthma, continues the sequenced mania… strange wreckage indeed that rips through your ear in shrill-like varieties, only to fall back into that Residents avant classical vibe that started the album off.

This will either leave you with a splitting headache or a humongous grin... but I swear somewhere in this albums 59 mins I heard multiple futures...