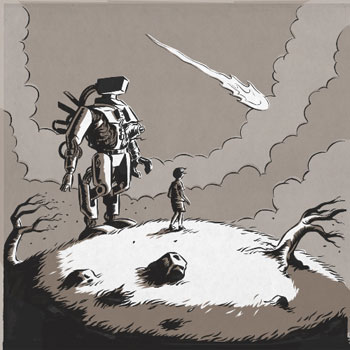 Number four in this continuing series, Hong Kong in the 60s have taken the project's base elements and bound them up in poptastic goodness. Each track starts in abstraction then spurs off into a slightly kooky, off centre, electronica that’s imbued with a haze of summery impressions… A bleached azure of harmonics wrapped in a suitably psyched delivery...

'The Ungrateful Root' starts out a slow span of synthetics and sluggish pendulum swing… quickly picked up in a drum Thumbelina and propelled further by a two finger key drone and a sweet burn of vocals... An Olivia Tremor Control sensibility taking hold of you as everything rides a glittery chandelier spin of texture that fizzes with expectations, beneath which a mechanical ribbon of squeak and tweet gently itches…

An Instrumental interlude 'Into the Forest of Eyes' follows, built from rattling metal tubes… quickly pinned in dubby glints and fairy dust... A sprinkling of organ … eking out a nicely fragranced almost bloated pre-amble as the bubble's skin catches the light in swirls of multi-colour...

A liquidised underbelly starts ‘Banbury Grove’ coupled with some robotic clunking, clanking… … Sounds like a toy bunny in need of some WD40, all metallic indigestions instead of drumbeats… quickly drowned out by breezy keyboards. A major key change heralding this lush Goldfrapp type female vocal that bunny hops leisurely over the hi-hat tinfoil… Further sonic jewels pouring round the lyrics and beats... mingling for a few blissful minutes before slipping away in a light ‘Vision On’ gurgle…

Fires up another short instrumental 'The Clearing' that signs off this offering. A soft vocal drone coupled with a swizzle stick rotation in a glass of Pimms, something that sums up this EP's mood perfectly.

collision and detection front and follow hong kong in the 60s