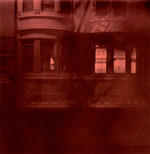 Electrelane – Axes 2xLP on Too Pure

Aaah, Electrelane. I loved the ‘PowerOut’, it was a truly inspired gem, but nothing could possibly prepare you for the sheer scope, excitement and intensity of this, the follow-up. I listened to this a couple of times, marvelling at the ideas and self-belief , then I was fortunate enough to catch them live in and suddenly everything made perfect sense.

For four tiny little girls from to have no fear whatsoever about making this kind of dramatic, spellbinding, maddening racket is truly awe-inspiring. The album is a vast leap from Power Out, in length as well as scope, covering sweet acoustic little wistful gems to sprawling mesmerizing mantras replete with passing trains edited into the track, from gentle piano pieces to drum-led avant-garde abstraction.

The bands have a pop at everything wrapping it in their own coating of hypnotic groove. They have chosen once again to travel to and record with Albini who thankfully (as is his way) allowed the band as much scope as they wanted. 13 tracks over 4 sides lasting about 1 hour is the package and it’s all tied dizzyingly together by the band’s obvious love of rhythmic groove. In fact from the frustratingly short bass led and hand clap filled ‘Atom’s Tomb’ complete with four note piano cycle to the lumbering majesty of the skronk-sax and passing train filled ‘Gone Darker’ the band scarily understand the intensity and dark power of cyclical repetition like Loop, Spacemen 3 and Slowdive before them and Can and Kraftwerk before them. The baton is passed and Electrelane are out of sight with it.

This album is far from a one trick pony however.’ Business or Otherwise’ sees the band dabbling with the avant-garde, a track led primarily by drums and guitar with lots of silence and no real pattern. The drums epileptic, the guitar like needles, piano pushing in here and there, it segues into an achingly beautiful band work-out which is reminiscent of Spacemen’s 3’s – ‘See you on the Other Side’ given a kicking, then a facelift and left hanging in the sun with the tempo going through the roof as Verity is singing if you can call it that. It is part sneer, part shout, so English in it’s derisive tone, the band urging her to get it out of her system, guitars flashing sparks, the drums so incredibly solid, they could go on for decades. For a change of mood, side 4 starts with a banjo and trumpet, joined by the Chicago Acapella for a rather uplifting, if sluggish track warning of the dangers of Axes with extraordinary vocal flourishes.

The more you listen, the more the different ideas become apparent between tracks and the more obvious the continuation from ‘PowerOut’ is. It’s about how the tracks are constructed and then laid together.

The penultimate track is a frantic hypnotic guitar affair, but is preceded by a doleful elegiac piano intro, which makes the full tilt of the second part more exciting. As the album closes and once again the band are whirled away on a tight rhythmic track, the up-lifting Acapella vocals really fill the track with a new day dawning feeling, which I think is a truly fantastic way to finish an album, as if they are just getting into their stride leaving you anxious for the next instalment.

I truly think Electrelane are among the most important bands around and this album is too good to miss.