Posted by Cloudboy on April 23, 2006
Well, Mr Olivetti visited yesterday and left a few reviews with me. Here's the first and as it's pretty lengthy I've included some snaps of the beautiful artwork that accompanies this release... 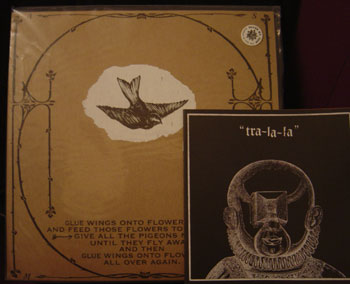 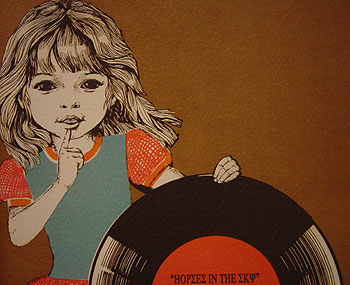 It’s been a while since I put keys to paper, but this album is possibly the most important releases of the last couple of years. It’s the fourth outing for Efrim & his merry bunch and with the apparent demise of GYBE!, they are Constellation’s most powerful and emotional vehicle. The grandeur of the vision has expanded over the releases and this particular album finds six tracks spread over three sides of vinyl, with a lovely etching on the fourth. It’s not all volume and racket to get the point across, though. There’s seven people listed as contributors and it’s the usual suspects playing violin, piano, cello, drums etc. But in a lot of places, it’s the use of tired, weary but hopeful voices which gives the album it’s emotional power. 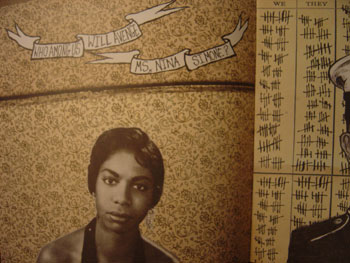 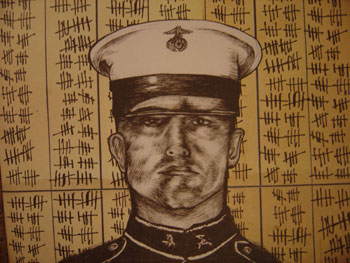 First track 'God bless our dead Marines' starts with a list of lost people; lost to drinks, drugs, marriage etc. ending with sparse drums and sombre piano notes, Efrim’s ragged chorus singing about a dream they had where they were all beautiful and strong. It’s the usual despair draped with hope that we have come to love from these guys. The familiar fearsome guitar gets an opportunity to frazzle the ragged chorus on 'Mountains of steam', where 'Horses in the sky' itself is a slow sad lament to acoustic guitar of the state of Canada & the US. It’s truly extraordinary what an emotive vehicle Efrim’s fragile cracked vocal really is. Certain motifs repeated ad infinitum get the point across; “Canada o Canada, I ain’t never been your son” they drone in “Teddy Roosevelt’s guns” as sickly strings circle and piano drops land in the well. 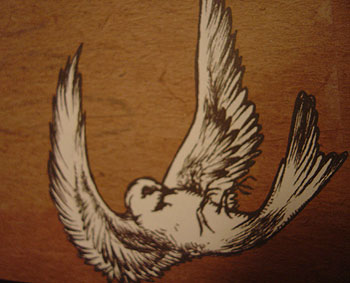 Side three starts with more chorus over an accordion line, jaded and distant , the vocal lines splitting covering different ground, Efrim weaving over it all, somehow creating order as the three seemingly random vocal lines dip in and out making a delicious brew. Honestly, it’s fantastic how simple yet so powerful this album has turned out.

The final track 'Ring the bells' is a full band work-out and after the relative calm of the preceding tracks, it’s exhilarating to hear the juggernaut sound building up. It drops until just a low bass-line is left and the sound then starts to build again, this time with a lesser intensity. You’re left feeling that although it’s great to hear the band stretch their legs, the true strength is in the subtlety and shading of the more emotive vocal-led tracks and it's so exciting to discover all these strengths at both ends of the sonic spectrum. 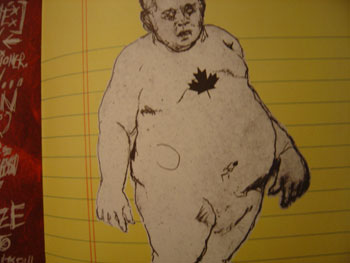 There are no attempts to follow in the footsteps of GYBE! and that's what makes Mt Zion all that more personal and special. It’s a subtle, fragile beauty. “Imagine the view, hit that switch and cut that man in two”; double bass, one note piano & guitar scree usher that final image and the album out. Efrim is still despairing about war, the modern world, our effect on it and translates it into this quite beautiful sound.

This is without doubt one of the greatest Constellation releases.

Bruno Moraes said…
This is a huge album, and you reviewed it greatly! I like to read other people's opinions about the Zions, because their work is dense in a way that multiple impressions can be caught in the air by a great variety of people.