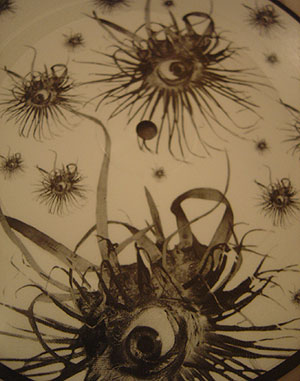 Misty winter mornings are made for this music - the chill, the glittering tarmac, the broken fingers of trees diffused into the infinite sky. All those different sound sources floating round a mellow stream of consciousness like orbiting satellites. Vocals in a mirage of tattered silks introduce the first side (De Zeester) like the astral sound of a musical saw - operatic and enticing. Strung to a heartbeat and slow rhythm, disembodied cords and bowed strings are washed up in the swell. Swirls of sound fray from the track's core and echoed and reverbed samples filter into the structure to give your ears a pure delirium - closing the eyes is recommended. Ghostly vocals return briefly with the track closing in over echoed laughter.

The second side (The Anemone) brings on field recorded bird calls from inside circular piano motifs and murky harbour horns, all laced on a repetitive rubber band like rhythm. My eyes dart to imaginary trees, but only concrete looms back. I close them to visions of nesting gulls in the hearts of pianos - their droppings splattering on the shiny paint work. Germanic words are intoned, they peak then disperse throughout this curious mixture. Later shrill animal sounds eat away at a toy music box - the geese cackle. Vocals echo repeatedly until a pulse like distant Morse code recedes into silence. 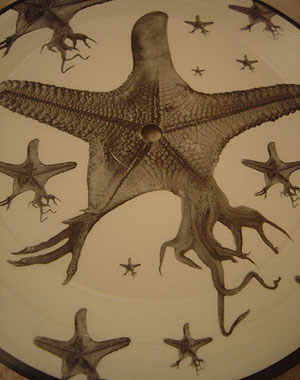 Beautiful artwork adorns this long play 7", both sides are covered in spooky little photo- collages. One side with tentacled and cycloptic anemones (suitably gothic and withered looking) the other starfish with unusual limb replacements.

I love the weight of this release - so substantial - in more ways than you at first think.

Loki said…
yeah.. they put together great artwork... i love the cd inlay for the iconoclaster CD... all green and bubbling with life...
Saturday, May 06, 2006

Cloudboy said…
Hiya Loki, unfortunately not got that one, but cool that those masters of creepy drone produce equally vivid artwork.

In fact almost bought it at a Death in June concert but for some reason didn't...

regrets a plenty, but luckily it isn't one of those impossible limited editions and still buy-able
Saturday, May 06, 2006