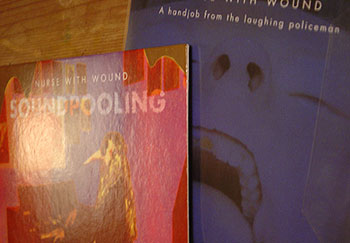 Well if a sound ever suited the environment it was played in – it would be this recent live recording from Nurse with Wound. From the inside cover alone the venue looks bleak and gothic with the terrible desolation of an Edger Allan Poe novel. 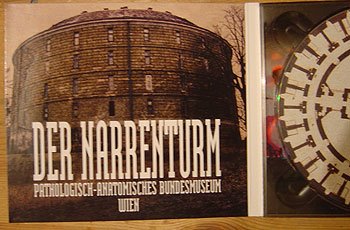 Apparently, according to the website it’s a late 17th century psychiatric hospital converted to a museum crammed with pickled pathological specimens and other grisly medical curios (see Jpaul23's pictures to get a better idea), just the sort of place which you'd expect the deformed ghosts of the mentally ill to still inhabit. The live track really encapsulates this atmosphere perfectly - a intense shifting drama of ill ease. It must have felt positively eerie to experience on the night, just imagining all those vaporous cries/moans echoing through the darkened interior of the museum, leaves me shuddering - an haunting image akin to the creepy Danish drama Kingdom Hospital, wordless moans bubbling in formaldehyde.

Clocking in at 65mins, this improvisation concocted from Salt Marie Celeste and Echo Poeme is full of creeping shadows, sickening nautical creaks and half smudged details. Lovely to hear the demented vocals of Diana Rogerson again, enjoyed them rebounding through my skull in slow circular disintegration. Also like the way the track’s undulating core stays with you like an indelible stain well after the audience’s rapturous applause has subsided, in fact I really felt like clapping along with them - marvellously eerie.

Track two sounds like a fresh variation on the echo poeme series. Love those ceremonial chimes and that climbing tension that culminates in some blissfully harsh sonic peaking - sounding not un-similar to Satan clearing his throat. This interrupts Freida Abtan’s thought provoking vocals and crowns its finish in the same raspy overload...

The Bonus disc cleverly entitled A Handjob from the Laughing Policeman is a remix extravaganza. A wicked 1 track re-work of Free Death / African Mosquito / Two Golden Microphones / Shipwreck Radio and probably many more obscure ones buried within. Wandering close into Coil territory the first half got me moving around the room like an unhinged pixie - a crooked disco classic for sure… where as the second half was more, chilled... a dub workout with some lovely grating freight train metal and spacey washes. The latter end is a slight return to the first disc with ‘Indernacht…’ on infinite loop, a whispering apparition in wharfside fog, accompanied by short wave flutterings. Stapleton’s voice can be heard through the murk repeating the syrupy words...

... all to a mellow ring modulation with the words – ‘Well there you are’ bringing the disc into a silent conclusion.