In the Maybe World - Lisa Germano 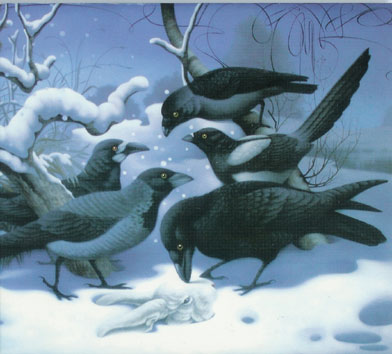 Following on from Liquid Pig this new offering is musically quieter, more subdued with less sonic flourishes than its predecessor. This characteristic stripping away (something that’s been in evidence since Slide) makes a great platform for that gorgeously dispassionate voice combined with her pertinent piano accompaniment, to achieve an emotional honesty that is paradoxically uplifting.

At first, lyrically her references are less oblique than previous works but the personal subject matter continues to flow unhindered, just not as fiery as on previous outings more like resigned unhappiness I suppose.

Mostly made up of beautiful piano led songs about a yearning to feel ok but never quite getting there, like on the opener The Day, where she intones ‘…like you’re running from your laughter’.

The tunes have a real ‘music box’ sensibility, delicate cobwebs that glisten with her melancholy, holding those disheartened lyrics together with a childlike optimism that seems to be dashed on every second line. Don’t get me wrong, this is not a morose album, full of doom and despair but one full of the warmth, describing the inconsistency of what it’s like to be human below those chocolate box smiles society sometimes forces us to accept, with an universal truth of feeling everyone could relate to however small.

Golden Cities and Into Oblivion have a real fairytale quality with a clockwork aesthetic of a tin carousel. They impart a cosy internalising of feeling which lends to you actually feeling like you’ve been invited into her head. The Johnny Marr textures at the end of Into Oblivion are simply exquisite, twisting round like creeping ivy.

Just when you think you have a handle on the album she throws you off guard by inserting the creepy In the Land of the Fairies. With slightly out of tune keys that you could imagine playing themselves, a vision of Lisa comes across like a spoilt child absent mindedly ripping the limbs off insects. A song with a real vision of mental instability ‘Who was that stupid ogre messing with my head’, she intones. Her vocals are multi tracked on verse two imparting a scary bi-polar vibe that isn’t softened by the dampened enthusiasm of her voice.

In the Maybe World is a lovely, slightly up beat song, her vocals melding to form emotional tags to the words, her vocals rising on the words ‘let the bird fly’. Apparently this song’s based around the bird offerings she received from her cats. “In the shiver in the freaking out see the live ones see ‘em taking off” she sings in a snaking of narcotic like breaths.

Red Thread is simply excellent with its wildly singable chorus of
‘Go to hell------------------ Fuck you’. With the contradictory nature of love, longing – captured in the last words ‘l love you, I love you too’

A Seed is a song about love, the lack of permanence of relationships or the self-destruction that such susceptibility lends to. ‘Keep it in a box and hold it close, suffocate the bits you needed most’ she sings and continues with ‘all this tired love just couldn’t flow’ like disappointment is always face-up.

The album ends on a happier note with a jiggley tune that has a piano that seems to skip down the road almost absent mindedly. A few darkened clouds float by but otherwise everything seems rosy, then you listen to the words and you’re not too sure… something that Lisa excels at and one of the reasons I have plenty of time for her music.

I’m so looking forward to seeing her this November as it’s been over 10 years since I saw her last in Camden’s Dingwalls, touring the Love Circus release (if I remember rightly). Also be sure to check out her recent show over at the 'Spinning On Air' archive, as it’s got lots of interesting background info to the making of, plus it's a great audio showcase for this new offering.

Loki said…
i was just listening to that first Techno Animal album the other day... the first saxophone (?) mantra is amazingly intense... the rest pales by comparison... same with the second album... the track with Hassell is fantastic, the rest is a sludge...
Friday, October 27, 2006

Cloudboy said…
ah, you mean that snake charmer vibe on the second side - yeah a real dreamy affair that melds into that God sax workout scrawl, but they were better suited to digital train crashes i think.

Re-entered 'the animal' for the Vs. Reality mixathon and ended after the 'Radio Hades' slop bucket taking in the bloody excellent 'Curse of the Golden Vampire' along the way.

If you haven't heard 'golden vampires' i'll post a trk or two...


caught the film recently on horror zone and loved the way the undead shuffled...
Friday, October 27, 2006