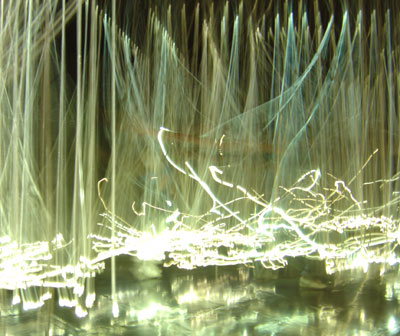 Organum - Volume One on Robot Records

Right from the first track ,a vision of a desolate play park comes to mind. Ancient swings and other mechanical apparatus move in a slow teasing cacophony. The rub of metal against metal like a memory of usage replayed under a veil of darkness, un-nerving textures echoing phantom-like. A writhing symphony of metal where tune is deconstructed into squeaks of unravelling abrasion served up on a bed of monochrome drone - this is serious aesthetic searching, and typical (for the most part) of Organum's unique approach to music.

Apparently this sound world stemmed from David Jackman's (Organum's king pin) childhood fascination with the noise of squealing train brakes. The high end pitch worming on this disc is certainly evidence of this. Starting with the resurrection of the 'Tower of Silence' EP of 1985, originally released on the impossible to find and now defunct LAYLAH imprint. ( I only own one Laylah anti-records release, bet you can’t guess which one?) This track documents the simple sound of a clock casing being scraped around a rusty bicycle wheel alongside other metallic bric a brac. The resulting sound is somehow removed from its ingredients, a strange disembodiment that produces a slowing of the linear and a glimmer of something un-quantifiable. Maybe it's in the sound overlay or just the way dense textures always bring forth unrealised patterns but their unquestionable pull can't be denied. What's also surprising is that each of these four tracks bring with them uniquely different atmospheres for something made from essentially the same sound base.

'Voice of the angel' with it's metal fatigue dialogue and slow clicking back rhythm is a favourite but this is easily eclipsed by the next track - the 17min 'Rasa' taken from the B side of a split LP that was shared by Nurse with Wound . Here human vocals, like pressurised gas, release sibilant hisses through a deliciously muted metal carnage and gnostic moan backdrop ...fantastically macabre.

The last two tracks are more violently noisy than the drone soundscapes of previous, but still are hugely enjoyable with the very last track raising the stakes in crashing claustrophobia.