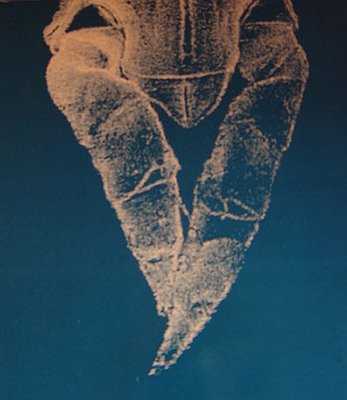 Released on a small Reykjavik label and featuring the godfather of the Icelandic avant-garde - Hilmar Orn Hilmarsson (or HOH for short) as honorary group member and co-producer, this is a perfect example of early 90's Darkwave/Industrial.

Admittedly, it's not as dark as the first Techno-Animal album (Ghosts) but it still holds it's own among the canons of the genre, especially for an industrial junkie like myself. There's even someone playing chairs if you believe the sleeve notes.

The opener 'Snakes' sounds like it's a forgotten track off Godflesh's monumental 'Streetcleaner' album. The lyrics are guttural, like the result of steroid overload, hog-tied to solid drums, throbbing bassline and noise accompaniment. I especially love the sample of the car burning up the tarmac, that skids in and out of the track - adding to the drama.

'Sluice' is a slow, backward sludge with gorgeously ugly keyboards, to which the economical lyrics 'Your fingers have been smashed', are repeatedly intoned. Strangely the song breaks structure in favour of a short electronic sketch that flips energetically around all too briefly before dying away.

Full of slow-mo percussion '808' is like a battery-powered gamalan in need of recharging, punctuated by samples and definitely built up like an inverted pyramid. Very distorted sea bird recordings, scraped strings, ghostly guitar impressions and the odd bit of reversing truly churn it all up in an extremely captivating way.

The cinematic vision on 'Pirate Paradise' is tensely built - brooding strings that mingle with a military snare skating across elastic drums and overdriven guitars filling in the gaps. The vocals sound similar to a disaffected Marc Almond circa 'Mambas' but more drained and full of evil intention. The lyrics suggest paradise is a parasitic existence, drawing interesting parallel to the insect halftone blowups on the album cover. The track ends beautifully with fragmented drum pattern and guitar stab squalor.

Having a lot of similarities with the more sprightly side to The Shock-Headed Peters, 'Call Me Jesus' sounds like a Karl Blake guitar-fest. Dextrous fingers all over the fret board producing some very satisfying audio shapes indeed over shouted lyrics. 'Call me Jesus....take my breathe away', he screams.

The oriental sounding 'Ointment' is a heavy percussive based workout, lasting for the majority of the second side. Ghostly horns, woodwind and other pagan like audio references litter the track. Throat and bird screeches cut through the denseness, I swear I can hear a chair or two being rhythmically beaten.

But all good things must come to an end and after the 11ish mins of the pervious track the electro punk of 'Washington' closes the album all too quickly...