Hooked up with KEK again for this show, lovely to meet a guy who shares the same enthusiasm for music especially the live variety, even though he hadn’t slept well for a number of nights due to an ill household. As usual, the Cube was on hand to smooth all troubles away with a particularly fine, string heavy, line up. 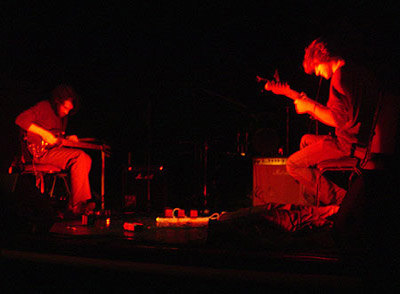 The Serfs were first up, a guitar duo from Manchester (I think), one manipulating feedback, the other containing it in a filigree of delicate guitar work saturated in delay and cloudy echo. The result was really vivid, rippling oscillations that took root in your chest and spread outward/inward like sonic surgery, your mind riding all the shapes/contours that evaporated, tantalisingly just out of grasp. The guitarist who looked remarkably like ‘Efrim’ from ‘Silver Mt Zion’, hovered an electro magnetic device (later found out this was an ebow) across the pick-ups to produce a slowly shifting drone that he carefully maintained through their performance. The Other guitarist worked within and around this with some gorgeous improvised guitar work. Polyphonic colours and textures flooded out, producing highly meditative stuff that glowed under the ruby stage lights. 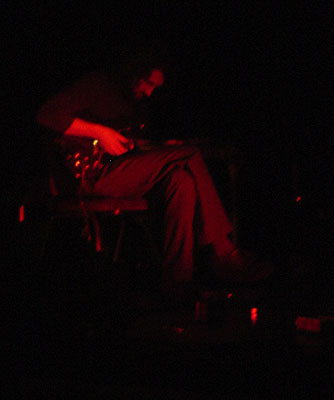 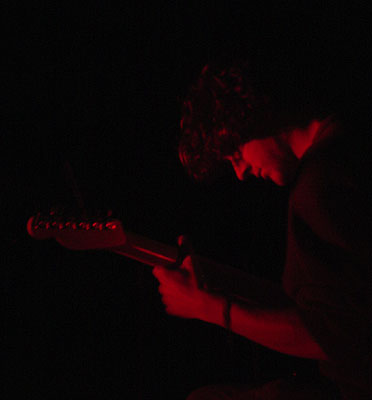 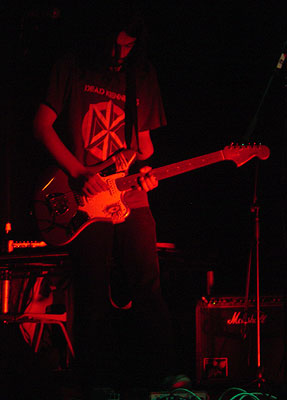 Thoughtforms the next band, started with ambient washes of effects driven gtrs hovering in the air like a vapour of nocturnal shadows, tangled lines of fuzzy/fizzing electronics. The girl guitarist was hunched over her amp coaxing divine squalls and bass heavy rumbles. From these tranquil beginnings they launched into a deceptively jangly detour that quickly ascended into some marvellous pyramids of sound complete with cut up junctions / intersections, then clearing without any of the momentum being lost. 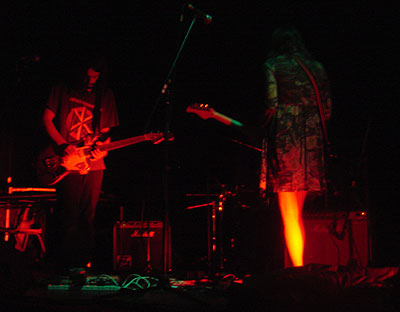 The background slowly built up again into some delightful blizzards of interlocking noise. As one tune ebbed away in a rinse of effects, the next rose effortlessly as if umbilically tied to the fading memory of the last. Really enjoyed that novel use of the input jacks, the resulting depth charges of sound scarring the air, and those weighty drums that thundered behind the guitar lines. Thoughtforms were amazingly proficient, creating tight hooks that would in turn be sabotaged beautifully, playfully mixing up all those influences – the explosiveness of early Pumpkins, the riff-tastic glow of Hovercraft, that taut n metallic sound of Sonic Youth (chiming as KEK so aptly put) circa ‘Evol’, Rothko, Ride, Slowdive, Loop, the list was endless, they just bled this stuff all over their performance in a giddy concoction that was new, inventive and worthy of your attention. It’s a pity my camera died on me, as I can’t share the incendiary forms the two guitarists were making when truly wigging out. Annoyingly enough, the camera seemed to work again for MV and EE before finally running out of juice towards the end of their set. 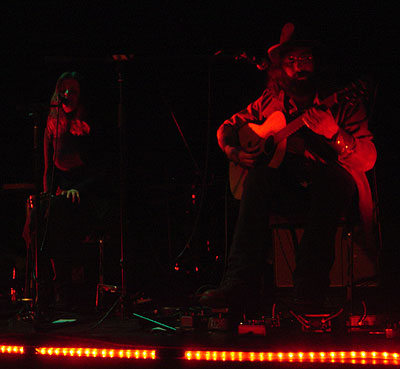 MV and EE’s show was more space blues than the frazzled commune madness found on the Tower recordings, which I'd spent last week re-listening to in readiness for the show. Really liked the way they subverted that blues/country genre on the night swamping it in their other- worldly effects, warping the time signatures, taking history and re-moulding to their own unique blueprint. Without the extra orchestration from the bummer road this was also a really intimate performance from just the two of them, and it was interesting seeing how each of them contributed to the whole. Erika plucking her sleek n shiny ukulele laidened with spacey swirl effects or adding whale like calls from her ‘Lap Steel’ on her knees, Matt on the acoustic making the weirdest of shapes, diverting to his electric to give the sound extra beef. 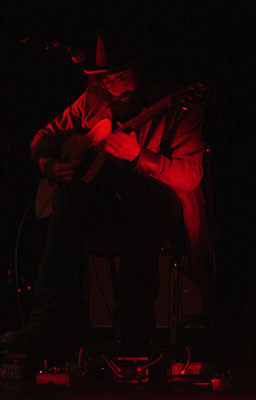 Each had an array of daisy- chained pedals at their feet. Matt would push them to their limit, sometimes losing the sound altogether, but thankfully only momentarily with Erika filling in the blanks. A great bunch of songs were showcased, mostly from their recent double, Erika’s vocals bewitching, Matt’s weather worn n rustic. ‘Anthem of the Cocola Y&T’ a song about a stateside ‘hic town’ that hasn’t changed since the 30’s was a sublime cosmic bluegrass workout, the lyrics sliding around vaporously. Speaking with them after the show, they seemed really laidback, peaceful people whose only aim was to spread their love out into the world, something they succeeded to do with me, Kek and DJ Baz... 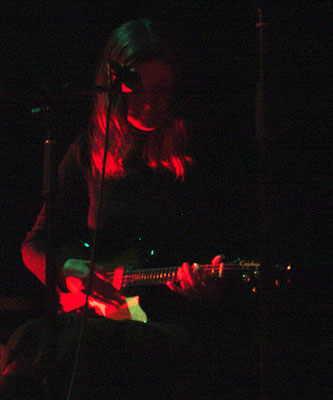 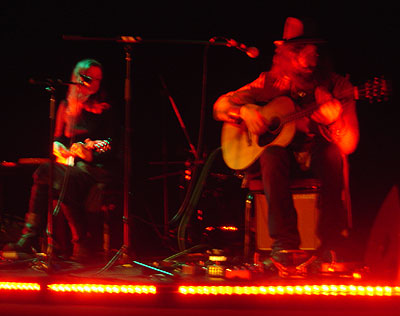 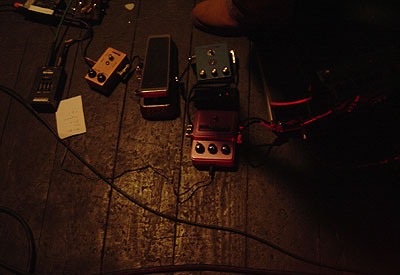