Wyrd noises from the barn

Finally, I managed to get over to one of the Sonic Sanctuary’s events that have been springing up recently. I was especially eager to catch Lacuna after listening to her vibes on myspace, and found a whole heap of others that satisfied my ever increasing musical palette, some of whom stretched the acoustic tradition in pleasing directions.

The venue itself was set behind the Lamb Inn, a small barn with the stage walls decorated in trumpets, guitars, church organ pipes and a toy orangutan clinging for dear life to two violins. A net of Christmas lights hung above and the stage lights had this strange spliced red /blue vibe that had me wishing I’d brought my 3d glasses along to make the place even trippier. 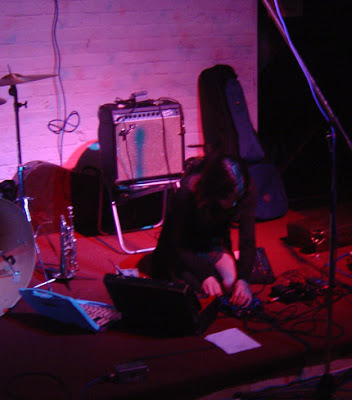 Lacuna started the ball rolling with some lovely looped music box textures, comparisons with Colleen immediately flooded in, then mutated as cuteness rapidly veered into deliciously dark territory as the effects pedals tainted the proceedings in a sinister Hellraiser style vibe - the amplified spring on the ballerina adding an extra wow factor. As her set progressed she introduced xylophone, keyboards and trumpet to construct fragile backing rhythms for a superbly individual vox that crept all over yer , maybe not as wayward as Delphine Dora but still unusual. 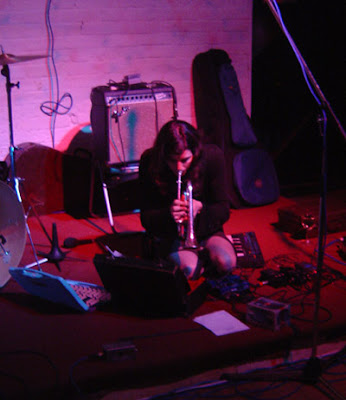 When she was joined by a friend on stage (sorry, his name escaped me), his baritonic sound created a lovely Nordic counterpoint to her feminine highs, subtle flavours of apocalyptic folk eased their way through – brief glimpses of ‘Moon Lays Hidden’ filled my mind. Love the use of the trumpet too, not many people can pull that off within the delicate nature of this type of performance, but here it soothed its way into the mix. When Lacuna sang a song about the reminiscing of childhood it was as if she was actually chasing the shadows of her former self right there. What’s more, it was completely un-accompanied by any other sound but her voice, both highly personal and universal truths were felt. 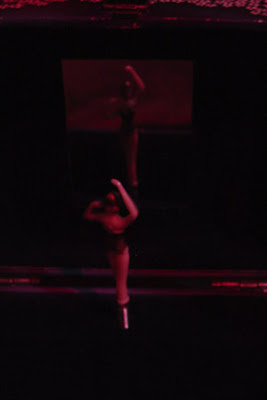 I took this blurred pic of the music box, the ballerina's tutu was damaged earlier by Lacuna’s daughter. When the show ended I haplessly showed my appreciation by saying that her set was ‘really nice’, I cringed inside, it was a woefully inadequate description. 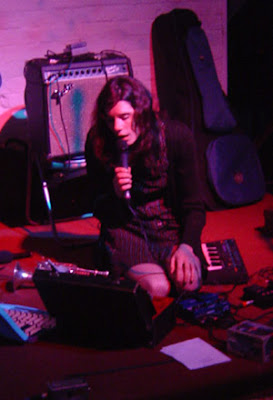 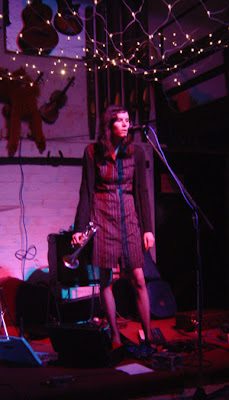 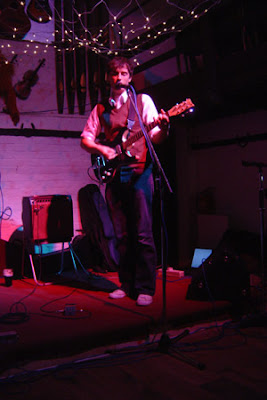 The next band Gentlemen’s Relish were a tight drums and guitar/vox combo, who had an unique 50, 60’s America twang (high end tuning I suppose) to their sound that wouldn’t have felt outa place in a Lynch film, especially with the superb crooning of the guitarist as he jigged on stage to the perky tunes a flowing, Mr Olivetti pinned the sound to 80’s cherry red and at some points I just had to agree there was a definite jangle going on that you just had to move to. Apparently this was a stripped down version of the Relish, but it didn’t suffer anything because of this as it kicked the shit right out of most of that insipid chart stuff that passes for indie nowdays. At the end of their set I immediately grabbed one of their free CD’s in the hope I could re-kindle the flames back home. 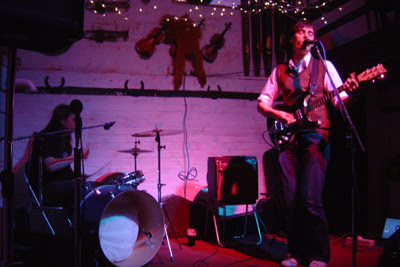 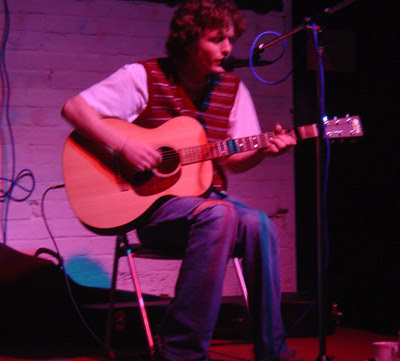 The next guest, Rob Sharples, was a fiendishly good acoustic guitar man (he played a wicked take on that famous Davy Graham tune - Anji) he also had a voice to kill for. His words reminded me a bit of Radiohead before Thom got a bit too wingefully self-indulgent. His words poured over each other, lovely metaphysical descriptions of frustration and other things, some of which I wish I’d written down as I spiderly sketched along to sounds he was making. 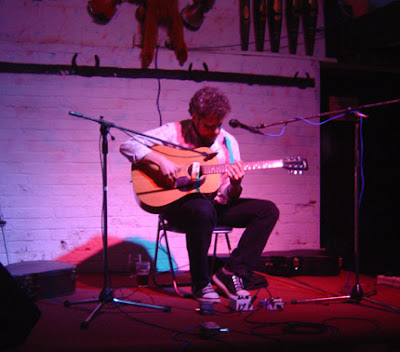 The last act of the night, Primordial Undermind ,who bore an uncanny likeness to ‘Karl Blake’ (but less scary) started with a fascinating bowed / plucked pre-amble on his acoustic. The strange shapes he was making were flying in the face of tradition beautifully, harnessed by a resonant drone but leaving lots of space for the sounds to breathe. When he was actually playing he broke the rhythmic thrust into a series of eddies, swirling patterns, his fingers all over the place; you could tell this man was really having a ball. The lightening fast accents his little finger was making on the fret were incredible, like paragraph breaks in the flow, devices that switched the tune in a multitude of directions. Showcasing mostly an instrumental assault he used a few pedals to dirty up the sound to great effect, and it came as a bit of a surprise when his vocals appeared in the midst of one or two of his tunes, simple poems that contrasted perfectly with his frenetic finger work.

This sort of thing happens at the end of every month in Trowbridge - what's more the line up for the next installment seems very groovesome too. 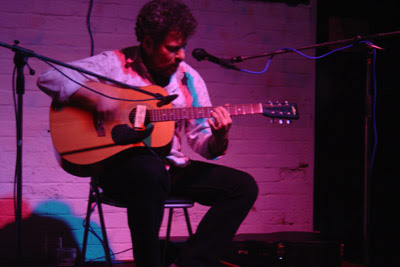 Anonymous said…
Thanks for the kindly review! Much appreciated.. sorry I wasn't more talkative on the night - I get very nervous! Any chance I could use some of your photos for my page? Wondered if you'd mind emailing me them bigger sized? (ruthrevell@hotmail.com)