Posted by Cloudboy on June 03, 2007
Whilst I was away soaking up the Greek sun like an insatiable reptile, Mr Olivetti was on the case with the latest sonic excursion over in Trowbridge. This is what he had to say: 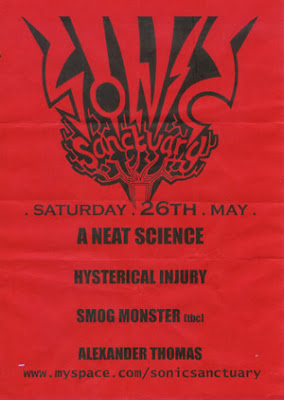 This was my second visit to the aural lucky-dip that is the Sonic Sanctuary held behind the Lamb in Trowbridge. Four acts for just £4 and who knows what to expect, except for the organisers, a great night out in anyone’s book.

First up was the three pronged grunge-metal attack of Smog Monster. Gary, erstwhile drummer for Gentlemen’s Relish fronts this guitar-hungry trio, who slice up the 90’s grunge sound and fry it with a little metal. Gary’s rather plaintive vocals toast the ears of the assembled. This was their first gig ever. Witnesses to history, that’s what we were.

Second up was Alexander Thomas who was an extraordinary contrast to the preceding act. Up there just with a Theremin and digital loop machine, holding the audience rapt with his miniature orchestra. The skill involved playing his machine, let alone the timing required to layer the sounds made for a mesmerising performance. At times it sounded like violins and at other times, birds - fascinating.

Third up and on their last date of a mini-tour, were a three piece going by the name of Hysterical Injury showcasing a surreal post-rock sound. Two guys and a girl vox / bassist. Sounds good even without listening, but they really knew how to make a noise. The vocalist, yelling and dancing like it was 1979, the guitarist getting sounds out of his instrument that were utterly unnatural and a fantastic drummer, who was so fast, yet hard and amazingly still in time. They kicked up a superb storm as they tinkered away with their effects.

Finally the Bath band, A Neat Science were up. This four piece come from an emo-metal direction full of weird tunings and breathtaking switchback time changes. Their charismatic front man was screeching one second, singing the next, with the bass and drums keeping the whole thing on the rails, but only just! The bassist making it all look so easy, yet coming up with some lovely lines. In the corner, the guitarist wrestled with his instrument like he was trying to exorcise it. The singer even made his way up to the balcony to join the audience.

Honestly, it was a great evening. All bands were good quality and seemed to be really enjoying the occasion. If you are ever in the Trowbridge vicinity on the last Saturday of the month, you really need to find your way there.
a neat science alexander thomas hysterical injury smog monster sonic sanctuary