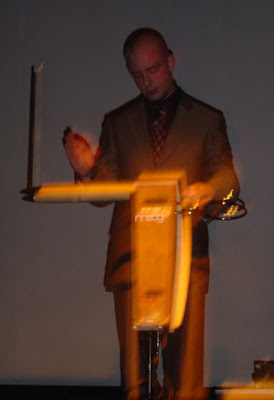 Alexander Thomas was all digital clash and curiously spooked tones, His Rasputin like hands echoing Greek orthodox iconography as he sent signals across the Theremin, shimmer fish softening the hard edges, working across the judder. The collusion was beautiful, sliced up within the boxes at his feet, rearranged, and forced back to eat its own tail in a convulsive cacophony. Those spacey whispers you expect from the instrument are there, but chopped up they made some lusciously evil shapes – that made perfect sense. Like gift wrapped brutality, orchestral sirens crucified, haemorrhaging out a Möbius ribbon of its own making. In contrast the outro was all birds calls circling round a soft ascension, the summer that could have been. 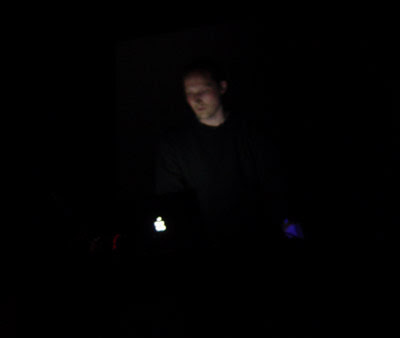 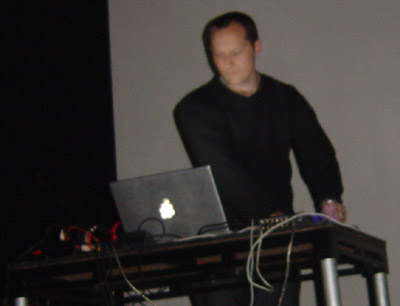 In the sick glare of the computer Lawrence English’s pincer-like hands twitched with activity, switching dials and twisting knobs as he slid n shifted the tones into a harmonic seamless whole, pushing them towards prism cul-de-sacs that rippled the speaker’s skin. I was craving more drama within all those cloud like inflexions, then some guitar etched through, vividly contrasting with the smooth folds surrounding it. The real pleasure though was in the deconstruction of this, a gloriously stretched and warped inversion, which switched the lights on in my head, as tiny miniatures within the sound were forced into major players, becoming tensile poetics of movement, it felt like your ears were literally rotating around your head.

Goodiepal ditched any musical intentions and went on a mad and sometimes hysterical ramble through his own realities. Euro drenched tales punctured by schizoid language skips, whistling origami constellations folding, private recollection and some wicked Nordic throat violence. The disturbing thing is that it all started to make perfect sense after a while, computers are bad for us, disappearing culture, the way we see the past in tidy approximation but always crave the future in abstracts. The stories the man had to tell were amusingly oblique and surreally dealt out in true comic fashion. 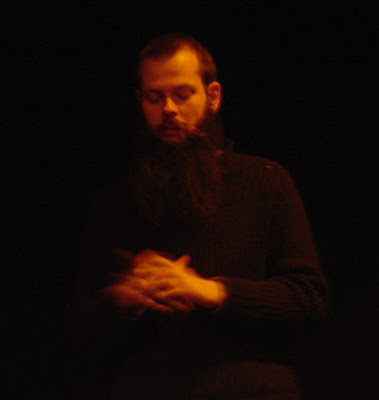 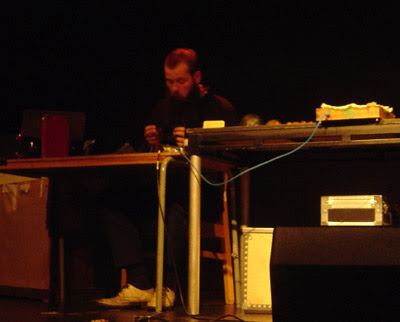 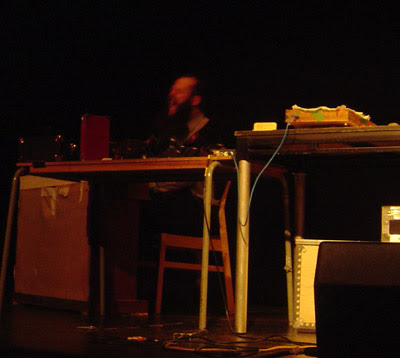 Handing out bells to the audience we accompanied his music-box ‘Titanic’ theme tune butchery – as he poked fun at mainstream perceptions. Loved his trans-euro cliché busting, shifting narrative, and hilariously dry piss takes - a joy to behold, even if the music was only semi-present. Fascinating the way that incredibly hairy chin of his seemed to meld with his jumper. On the way back to the car, the wind outside was making crazy shadows of the trees, as rodent like leaves scuttled the tarmac.... The Adolf Wolfli like scores Goodiepal was demonstrating earlier started to come alive in semi silent symphonies.
alexander thomas gig goodiepal lawrence english the cube