Posted by Cloudboy on January 22, 2008
Side one starts with an old style data run flowing through your fingers, splashing on the floor like an inverted brolly graveyard of broken winged fairies. Sounds roasting on the spit plate, sizzling strands travelling between the ears. Séance like shapes n shadows blossom, greedily gobbled back down feedback throats, leaving raspy belches in their wake, gaseous clouds buck shot peppered, tattered and singed. Staring into the vortex leaves you feeling queasy (in a good way) all those half buried sounds curve balling your cranium, as the unholy stink is cauterized by insect-o-cute blue laser zaps and warped Japanese lullabies. 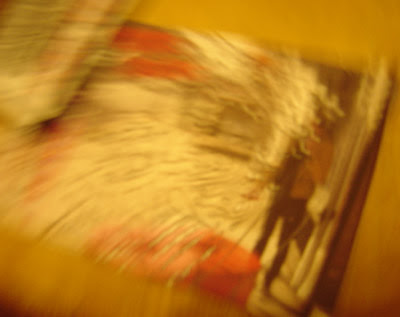 Side two starts off in reverbed and echoed clanks and pulses, the inklings of a tune suffocated in debris and guitar reek. Co-conspirator, Foxy Pink Gloves shoots poison drenched darts of clarinet through the murk, sax-like squeals with flanged tail feathers, excreting ghostly smears. The machines loop over themselves like Escher drawings, fx-ed to fuck, drizzling some crooked gamelan, as monstrous faces creep nearer…somewhere a cattle-prodded monkey is spasm-locked within the circuits. Shit this sound is so blissfully over-crowded, it’s unreal... Then everything cuts away to silence, but just as you think the action is over, a simple looped phantom rasps your ears so faintly the darkness threatens to extinguish it. This grows into some pleasing repetition before the sound is kick started again with a violent gyroscope coughing and spluttering - some mutant techno candy...

The best way to describe the music would be apparitional, a slow machine wrought nightmare you just can’t wake from. The sound effects from some self perpetuated ectoplasmic fall-out, or the simple product of delirium. Its rough edges may not appeal to some, but for me this gritty 80 minute plus improvisation is just the ticket.