I’m afraid there’s no photos of Men Diamler’s excellent unplugged performance in the bar as I was busy wolfing down some late dinner. The set was a pre-curser to what would happen much later on in the evening. Loved the way he turned the songs around, like a demented pixie jumping round the room with equine skips, was half expecting a few severed fingers to be sent flying into the mix with those guitar strings being whacked so hard. 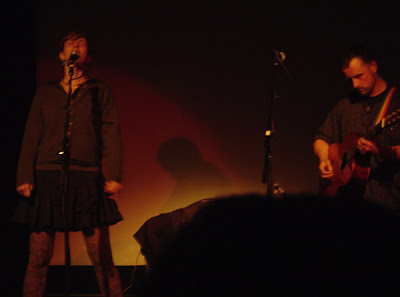 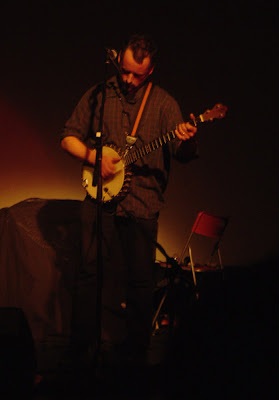 Catching Cath and Phil on stage was an altogether mellower experience. Cath’s singing voice sent little shivers spine ward, her stance triangulated for optimum control. Really warmed to the vibes they were putting out, lyrically surfing the traditional folk fare of human misery, backed by Phil’s sparkling banjo and guitar playing. I suspect they could have pulled this off without any amplification as the accapello portion of the show proved, both voices miles away from the mics, Phil creating a harmonium drone which Cathy weaved around playfully. The lullaby ending silenced the auditorium with an eerie hush... 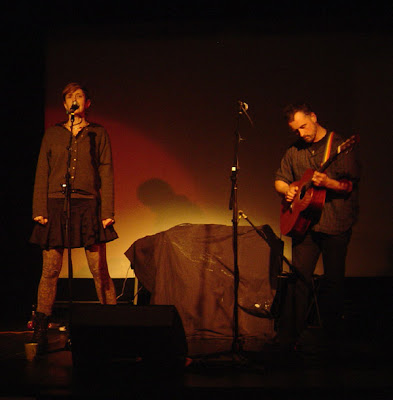 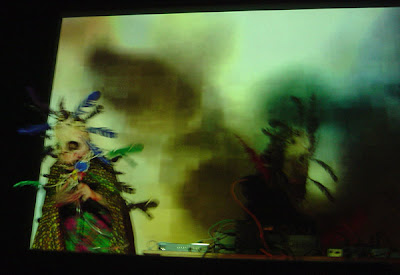 I won’t dwell on our show too much as Mr Olivetti has promised a review, but Kek and I felt the new stuff went well, even if You-Tube seems to have mangled the video I put up….portions of the show flirting with the shamanic, veering into to some black metal preoccupations. It was a joy to incorporate the Cube’s broken back stage piano into the show, I reckon you could base a whole album round those dismembered / skeletal cords. 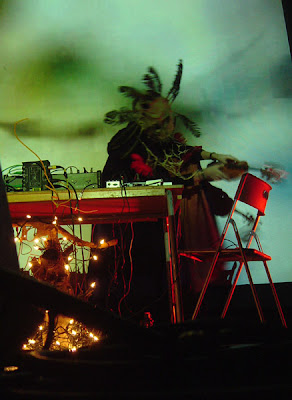 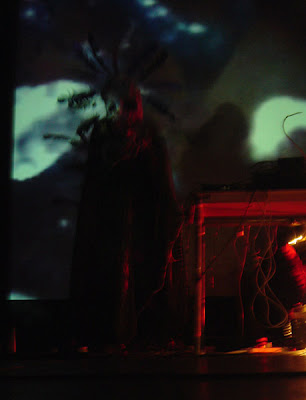 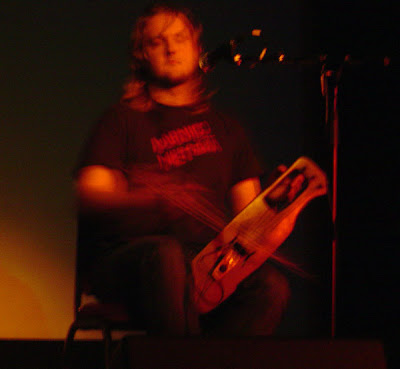 Pekko Kappi, member of numerous Finnish collectives, was a gentle troubadour of the horse hair, his gliding voice a broken sun on rippling water, the lyre a mirage of remote, imagined landscapes and ancient ways. His song descriptions had a satisfying ‘lost in translation' vibe, at times hilariously dis-located, making jigsaws that had a strange logic of their own...Incredible to think that all this richness was played on only three strings! 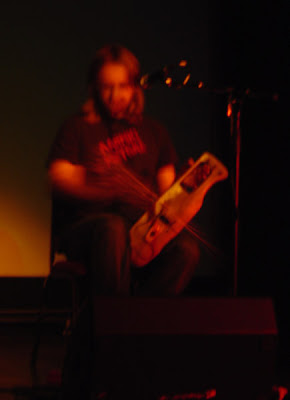 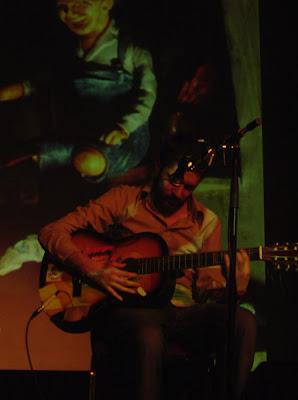 Men Diamler’s show was fab, tearing away at your singer/songwriter preconceptions, replacing them with black humour and visceral gore. Great songs, a collection of sad / disturbed ballads speckled in brackish comedy. Starving horses in basements made into bone xylophones, fields full of burning cattle, his distorted visions were stabbing bright lights in my head. The show had lots of audience participation too, Diamler inviting them to sit round on stage with him, getting us to vocalise a staggered ‘sshh’ backing to one of his songs, which was simply incredible - like the hissing of compressed gas, a thousand human rain-sticks slipping through the head – the genius of it! Liked the way the man was jumping about the stage falling over his tunes in a vicious abandonment, twisted face throwing out the words, even the quieter songs rippled with a gristly sheen.

Thanks to everyone who shared the bill with us, really enjoyed chatting to you all - Tom for the incredible sound, Chiz and Mark of Qujunktions for inviting us to play Bristol a second time round, and to everyone who turned up on the night...boy that was a quite a crowd, a warm hearted thanks goes out to yr all… 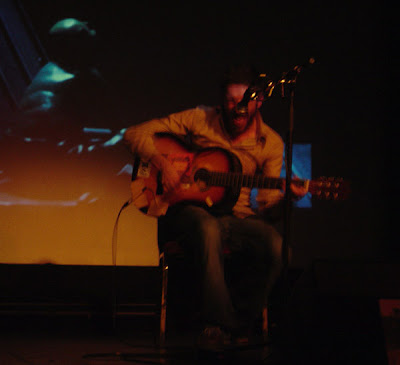 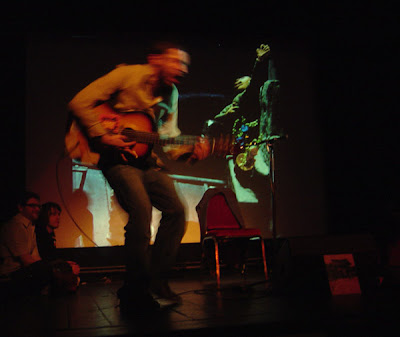 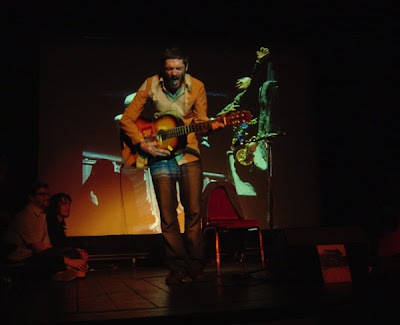 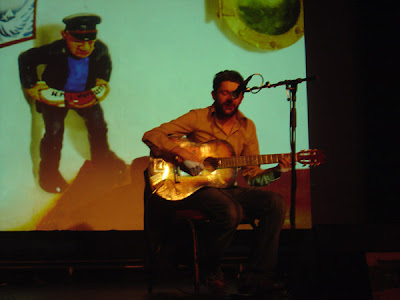 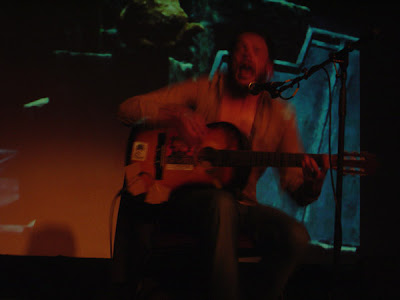 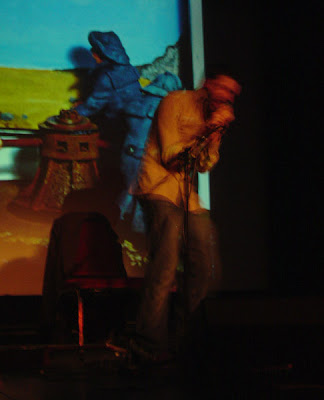 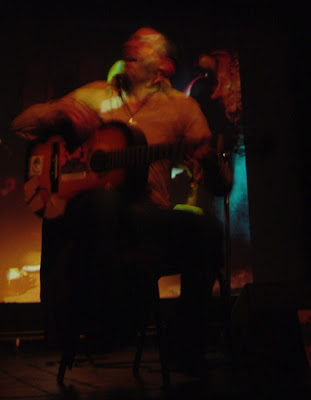 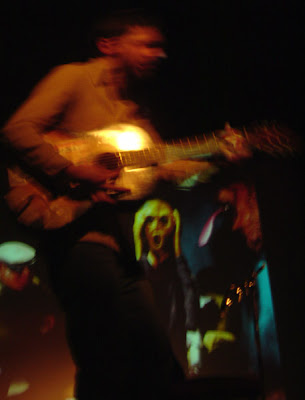 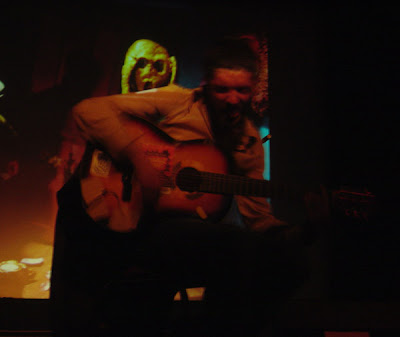