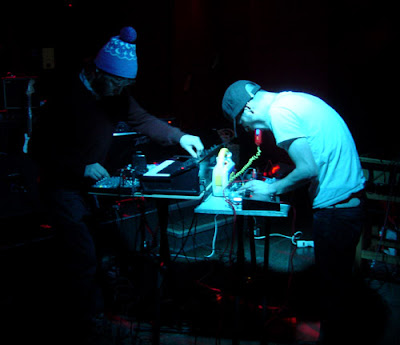 Forest Creature turned out to be an enjoyable noise duo. Their set was full of really physical attacks, as they moved broken glass abstracts into pulsating rhythms and semi-melodic shifts. Smiling at every tasty progression eeked out of their equipment, they swayed to their own creation like hypnotized bunnies. Some of the frequencies they were pushing were really close to bowel opening, as they rippled their zest through the numerous bodies assembled... 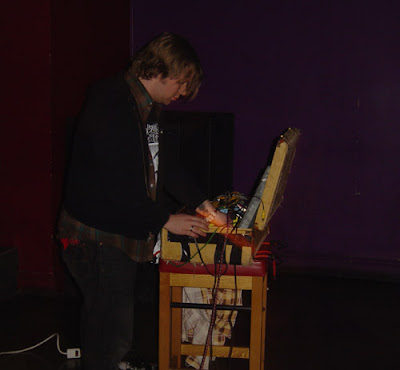 Hands groping inside an open suitcase, Burial Hex drew you into his show with Elph-like quivers over which ritualistic hammers broke, suitably bathed in spacey echo. Was amazed by all those details he was pouring into his soundscapes, meticulously layering them over each other, you got a real sense of drama between the differing textures and a fair amount of dread crept over the edges.

His show was a dark and captivating pleasure, oozing a vaporous gothic flavour – somebody definitely worth seeing again. Here’s a peek inside his magic box for the tech curious. 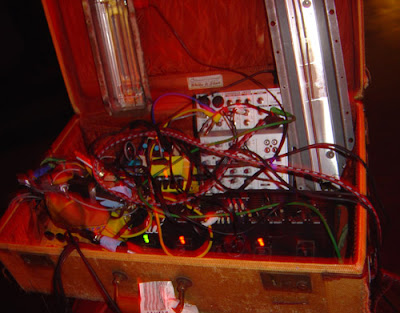 Must add at this point, the musick pouring out of the PA between acts was a perfect complement to the evening, great drawing material too, sounds like the Aurora Borealis label has a great roster of doom, gloom and sinister shadows, I particularly recommend this one, really dig that necro-erotic cover... 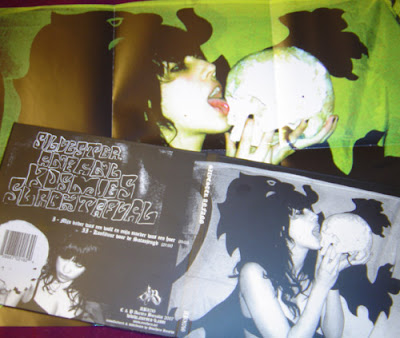 I know it’s only the end of March but the Flemish headliners turned out to be the best band I’ve seen all year. This new incarnation of Silvester Anfang really rocked my world with their brand of textural mysticism. 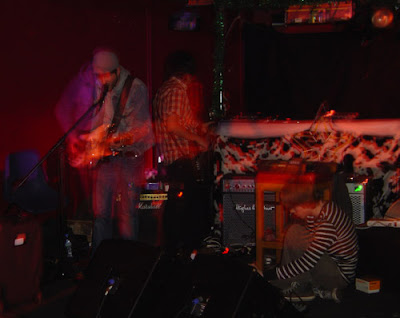 Their first track (dedicated to KEK) was a long miasmic jam of epic proportions; a slowly built momentum that swayed about like a flame caught in a breeze, Belgian radio samples supplying some really narcotic splinters of speech. Leaning on the walls of another reality, the atmosphere they created was ethereal but strangely solid, reaching stratospheric proportions similar to Sunburned’s improv meanderings in an anti-funk mood, coming across like a ‘more focused’ Acid Mothers. The guitar work followed the flow superbly, receding, curving around, sometimes impregnating the sturdy dronic bed of shifting tones that carried the whole …intersected by shiny cymbal shivers and loose drum wavers … druggy keyboard slipped under, barely perceivable bells… the canvas quickly filled up, topped in the creamy sibilant of amp buzz - Incredible stuff! 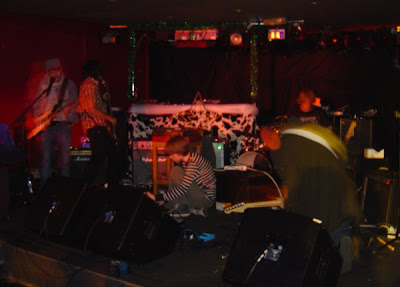 I shouted into Kek’s ear to the affect that this lot really knew how to rock, Kek nodded back adding, ‘I think they have the potential to be the greatest acid rock band ever!’ From the vibes they were putting out - I found it hard to disagree.

The second track was somewhat shorter, but by no means less enjoyable, bodies lost to the beautiful noise, I glanced over at Kek who was in an equally blissful state – trapped in the hallucinogenic rhythms that swirled on forth - a sensation that was sadly short lived, as the band strictly adhered to their 30 mins set boundaries. 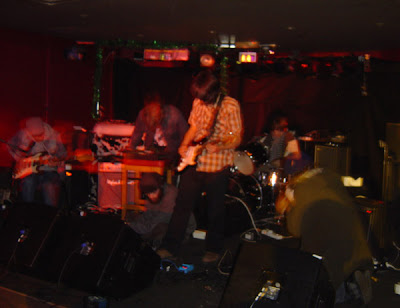