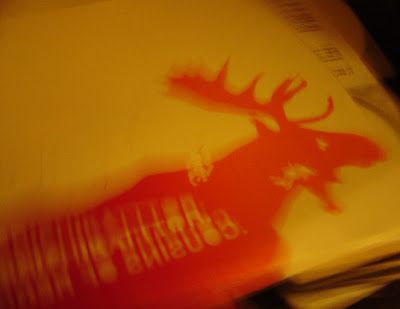 Fresh from the Paris record label - Galerie Pache comes another limited 12 inches of shininess, this time wrapped in a screen printed fold-over (liking that elk/mousse imagery very HNAS). A split release between two bands, one side is pure power-tool waywardness and the other a skuzzed up rock toad with some tempting glimpses of Krautdom.

The Lubriphikatttor side - starts off with a slow and heavy booted crash, caught rhythmically in the blades of an extractor fan and etched in a bouquet of random swarf squiggles. Something resembling guitar quickly descends into nose-diving electronics, frequency wheals and some really, really vicious drilling. A scuffed, almost compressed sound, layered over a flat-ended flange rumble…. nauseating multi shifts in pitch follow through, grinding into you as if you were in the dentist chair, sweaty hands clasping the leather. Suddenly, strands of sound begin to resemble something vaguely humanoid – almost crying, heavily distorted, a decayed dalek vocal maybe…or are my ears playing tricks on me? Elsewhere, a two-stroke engine disappears into the distance, followed by shrieks of screaming, motorised saw and deflating latex flaps, like a remote controlled police car endlessly skidding itself into a wall, or a rotor-trim on a killing spree …absolutely evil….

The Cousins of Reggae side is more band orientated and seems to be split into three tracks, although the sleeve notes denote only two. The first is really fucked up and dirty, a bassy beast tied to hissing cymbals and fuzzy beat. The guitars spitting out grainy grooves under which vocals literally wilt and wither. When they lock groove the electronics into a pulsing switch-a-roo on the second track, things really get thrown in a tasty Kraut direction, with everything else literally trailing behind, kicking up the dust, coming across like a polluted Oneida. The last track is overblown and seriously distorted, vocals struggling against a tide of deformed instrumentation and primal ambition – a sweet excuse to flip the record and start over again.
cousins of reggae galerie pache lubriphikatttor music review