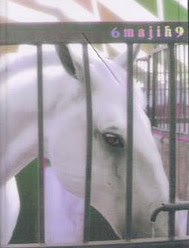 Imagine if you will, an abandoned house somewhere; tall ceilings, a large open fire place where somebody has managed to get a roaring log fire going. In front of it, facing away, an assembly of various drums, though not many, a couple of cymbals, a bell or two, maybe a biscuit tin.

The drums are lit by the fire and a drummer sits with his back to the fire. Some power has been channelled into the room, enough for a couple of guitars and maybe some electronics. These are facing the drums and are lit from behind by candles. Somebody has told the drummer that for the next hour people will be coming through the room making noises and he has to roll with it, steady the ship so to speak.

Imagine this and you are part way to enjoying the sweaty, narcotic vibe 6majik9 have laid down on this cassette. The drums are the glue that binds the sprawling and eclectic set together. There aren’t too many and they certainly don’t rush, they veer from death march, through Haitian voodoo, barely there feathered cymbal to loose arrhythmic textures. The drums are mainly accompanied by manipulated guitar and extraneous noises.

Each of the two sides are split into about three sections and the listener is taken on a variety of differing sonic journeys. Sometimes the guitars will frazzle and shriek with feedback shocks, at times they sound like rusty train couplings, grumbling and groaning.

For one section the guitars sound like jet fighters dive-bombing and strafing the ancient locomotive drums as they wend their weary way through a barren land. Electronics aid the aural firestorm and in some respects the atmosphere developed brings to mind the slow-burning visceral assault of Physics, the drums fighting their way across the rails through the hail of noise.

The tracks don’t build to a particular crescendo or anything, each is an obvious progression from the previous, although the final chapter is a looser more fluid free finale, the rhythm held by a clicking sound, honking sax and subtle clarinet lending a campfire air to proceedings as the drums go from cavernous to feather-light and then it’s hard to believe the side is over and an hour has passed.

6majik9 have produced an engrossing and ultimately very satisfying aural tapestry which unfolds at a sedate enough rate to be able to pick out all the little ingredients. Only 100 cassettes produced apparently, but I would urge them to make more, as this needs to be heard by so many more people. Those who wish for atmospheric adventure on a cassette can look no further.

Anonymous said…
Ha... at the recent gig I bought a Time Life cassette. It was actually one sided!!!... I thought there was something wrong with it but Discogs tells me otherwise. I'm going to have to buy some more at the Nonhorse gig sooooooooooon...

I'm still a bit astonished that I have begun to buy cassettes again (even 20 years ago I seldom did buy pre-recorded cassettes). My poor dilipidated tapedeck has no idea what hit it after years of neglect;)

I reaaaaaally hope all the Pauze-fest plans will happen!
Friday, April 04, 2008

Cloudboy said…
yeah, strange now cassettes seem have that retro feel that vinyl had when cd's were the flooding everywhere. Find those one sided tapes really frustrating though, i'd rather they recorded the same trk on the flip than leave it blank, i have a mv+ee one where i thought they'd suddenly gone all minimal - lol