Posted by Cloudboy on April 30, 2008
on Abandon Ship Records

This is a solo outing for GHQ man Steve Gunn. Spooky sepia cover aside, the music is mostly quiet and acoustic with some subtle electric splashes. The playing is sublimely understated and bristling with a craft that’s positively enriched by the crystal clear recording. It may not move mountains, but it’s refreshing when the music just glows warmly in your head instead of blowing through it. 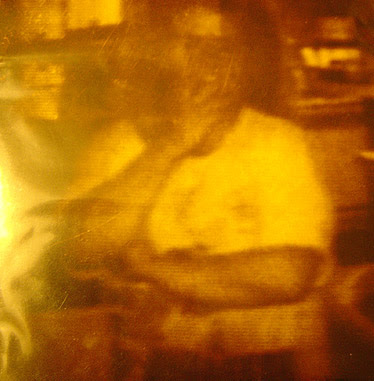 Young Subjects sounds not dis-similar to Hush Arbors, with that sparky guitar work thrown over a dronic hum, everything churned around in a pleasing circular motion. Steve seems to have a percussive style of playing here, full of accent jangles and edgy dips that literally makes me all a tingle. A secondary layer of banjo is worked over the top, softening the activity underneath, creating a kinetic schism to which an electric guitar further excites the senses, widening perspectives. A musical jigsaw of layers, closed shut with a simple acoustic refrain.

For Tyrone Hill has a far gentler pace compared with the opener, plenty of pregnant reflective pauses, the sharp chord switches carving things up a bit, adding drama, leaving you hanging on each phrase. A circular current takes it off in a different direction, then returns it back to more sluggish waters… a string scrape sweep ending the track.

Jerone and Jimi Chaplin starts with a muted percussive strum, all metallic tacked echo, like feet slapping water. A vague eastern flavour creeps on through, further expanded when the the banjo works around this in tidy arabesques.

Love the Nay reed aesthetics on the closing Two of Ammon... that distant Egyptian or Turkish vibe seemingly carried over from the previous track … wholesome guitar cycles slip into the foreground, a sound in which you can visualise the fingers, as the improvised tune develops, as if the notes were forming themselves – a nice balance of the swirling and sporadic. This is then expanded on with some electric guitar interceptions that slide all over the acoustic work, all quicksilver shimmer. Some vocalising/harmonising between Heidi Diehl (of WW&VV) and Steve Gunn subtly breaches the proceedings, with the electric guitar shining like a Floyd solo, full of Gilmore flourishes. Suddenly, the aperture closes then opens afresh in rolls of strings that catch the light beautifully; you’ll just have to imagine my disappointment as everything is cast back to an Egyptian textural fade out... give me moooorrrreeee i scream...

...Haven’t heard anything from GHQ, but if the playing is as good as this I’m sure to love them dearly.
abandon ship records cdr ghq music review steve gunn

Cloudboy said…
...improvised music is the best... crossing my fingers for a UK visit from them... any idea what the initials stand for?
Friday, May 02, 2008

Anonymous said…
STEVE GUNN IS THE REVELATION
Monday, May 05, 2008

Anonymous said…
Also for Kek-w and that Anonymous, I forgot the nice parts: http://www.radiowne.org/While-my-guitar-violently-bleeds

An hours worth of GHQ... There is also a VPRO Dwars session but they always ask artists to name the songs which results in them stopping in between songs. This annoyed me a little. I know they did that at the gigs too but it somehow all blended into eachother making it developping, streaming and dreamlike.
Thursday, May 08, 2008