Posted by Cloudboy on April 26, 2008
on Abandon Ship Records 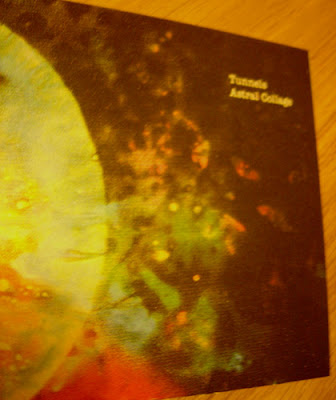 That Amon Duul-like liquid light, oily gel projection vibe of the cover really fits well with the percussive shapes and effects colourations going on inside. Firstly, those tabla echoes grab all your attention as they fall through that drone warble; gorgeously sustained. Then cymbal clashes and flecks of thunder increase the aural atmospherics, a woodblock semaphore breaking through periodically like a psychic woodpecker. Later, a drifting keyboard full of twilight warmth softens the focus on the preceding mysticism, opening itself out in lovely choral fragmentations.

Genesis Hall is all ceremonial rain-sticks and back peddling, almost elliptical guitar, A tune, seemingly in its infancy struggles away under a yawning, deeply echoic vocal, all expansively stretched - its warped reflections and moans as if from a differing dimension…

The third track is a tribal tape loop, a repetitive chant caught in a clattering foreground ...China is being piled in a box, now the cutlery... The boundaries becoming nicely blurred... The high end debris blending with the undulating vox in a salaciously trippy way... loose percussion filtered through the outskirts...

Golden Twigs is a folksy strum with reedy inflections, a medieval intermission of large patterned skirts caught in a summer breeze…

Order of the Golden Dawn is full of lovely and circular guitar strings, the finger work mutating with every repeated phrase, loosely fitting with a unhurried tambourine…. A growing dronal underbelly floats on by, almost unnoticed, grass curling round the toes until everything is gradually thrown over to it in an excess of saturation – a few discernable flecks catch your attention, like flapping insects ensnared in white emulsion blow out...

The vision And The Voice by contrast, is all hushed dronal progression with slivers of guitar, gentle slopes and loose percussion, things that are gradually bent outa shape, very subtly, like falling water through foliage…

The final track white stains clinches the deal for me, instantly bringing to mind Loop’s heady excesses. That distinctive guitar jab/oscillation and numbed drum combo lighting my head up beautifully. A slightly menacing vocal rubs against this, sounding like something that would have happily fitted onto Labradford’s majestic Prazision.

What a blinding finish to a rich and rewarding listen, full of time bending magickal detail and optimistic rainbows. 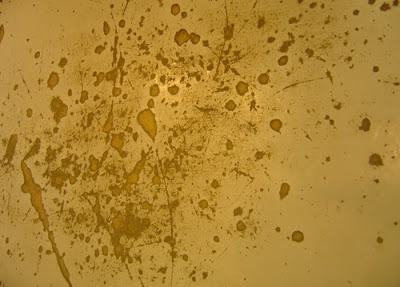