An Afternoon with Sunburn

Posted by Cloudboy on June 11, 2008
Sunburned Side Projects, The Michael Flower Band and Ice Bird Spiral brought together by qu-junktions

A great time was had afloat the Thekla as part of the Venn Fest' 08. The boat smelt all yeasty as we descended into it’s darkened hull, it was really dark, even when the stage lights were burning - let alone when masked up in our Spiral regalia, how we boiled...

The promised Side Projects that afternoon were all mighty fine, a tiny glimpse of the vast melting pot that constitutes the Sunburned experience... 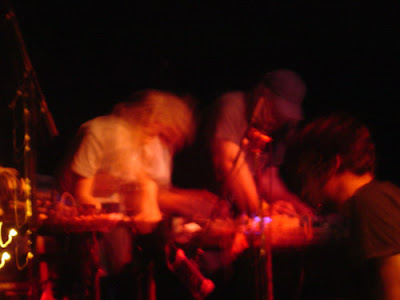 First up was Rzz-e-Bzz’s (risk-e-biz?) - a relatively new concoction of Sarah and Ron’s(?) - so new in fact I don’t think the paint had time to dry on the name yet. Both were bent over numerous fx units / sequined beat makers and the like... The results were really impressive, full of neat rhythms churning n skating around numerous flaking ripples and distorted bends, gleaming circuits making a home out of my inner ear.

After a few gulps from Kek’s gin glass, a rough plan of action was hatched and we climbed the stage. I suppose sound check uncertainty led us into more of a freeform noise set… contrasting nicely with our more sedate affair at the Cube a few months back... 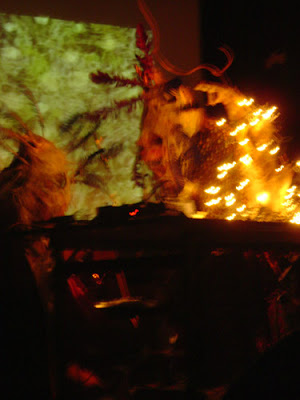 ...Lots of screaming-a-delics, guitar abuse, mangled keys, scraping and the like wrapped in copious amount of feedback squall, even a bonus face off rant in multiple languages... Some of which wouldn’t have been possible without DJ Baz bringing along a forgotten box of tricks... Lots of fun, worth losing my voice for! Doppleganger exclaimed later that we were groping into even darker territories than before, and chuffed to bits that Sunburned dug our evol too. 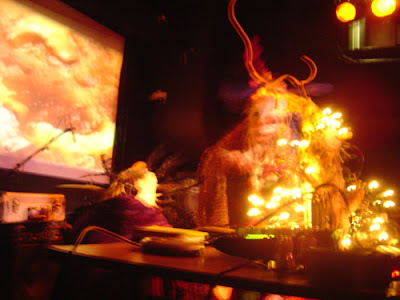 Unfortunately, only managed to catch the end of Michael Flower Band’s set, being busy bagging up all our musical paraphernalia. From back stage you could hear John’s drums smashing through that tangle of guitar, as melody surrendered to a wider wigged out aperture, with plenty of spurring shapes spewing outward. 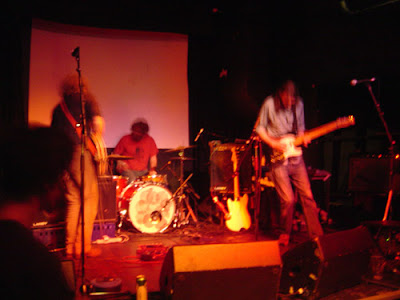 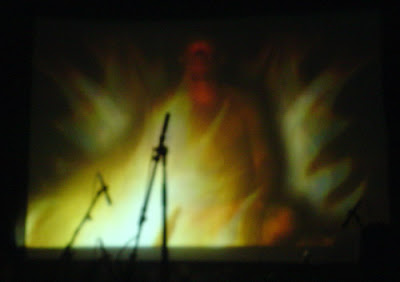 Sitting cross legged on the floor made perfect sense while watching the DVD screening interlude – Two eyes of the wood I think it was called – a spiritual voyage through a darkening forest, images slipping over each other, snails creeping across rotting fruit. Textural smears and flamed licks to a Buddhist drone/moan cycle scored by Michael's very own Vibracathedral orchestra – image and sound a cohesive whole.

This ancient sound divining continued with the next act, didn’t catch the name unfortunately, but what dribbled out of the speakers was pleasantly stoked with mysticism... 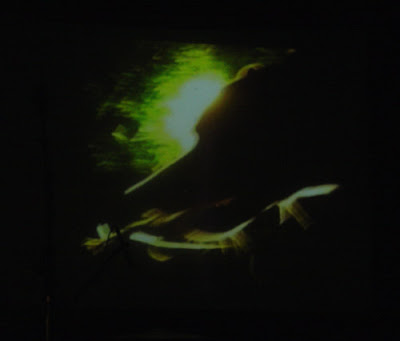 On screen a dogs canines tore into a branch, the branch’s fingers making antlered shadows of the dog’s silhouette. Glowing flashes of red, orange and gold sparking through it’s gaping teeth, vague hints of shapes breaking around a halo as a tree-trunk smacked the stage to leper bell refrain, the vocals moaning a close mic{ed} sacrament to a rotating horizon - everything covered in a satisfying ambiguity.

Last up were The Clear People – their set started with them pawing over these digital memory units that looked like miniature 70’s dancefloors – a vocal cut up concrete of grunts and other vocal debris came from within them, almost as if Cobbing, Chopin, Artaud and Schwitters were all trapped in a stuttering competition... This was followed by a spindle spun thought-form narrative from John, his intoxicating use of language is always a pleasure, and the images here so vivid, they literally vibrated in my head… Their set ended in a rocked out guitar/drum send off, the perfect end to that afternoon’s proceedings. 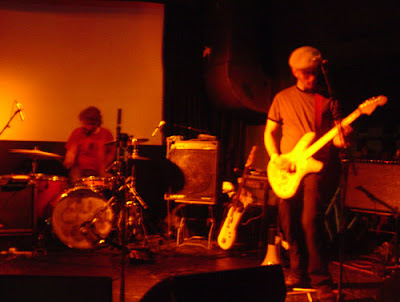 Thank you to everybody who made this such a friendly and exciting event, here’s to doing it again some time soon...
ice bird spiral michael flower band qu junktions sunburned hand of the man the clear people the thekla venn festival