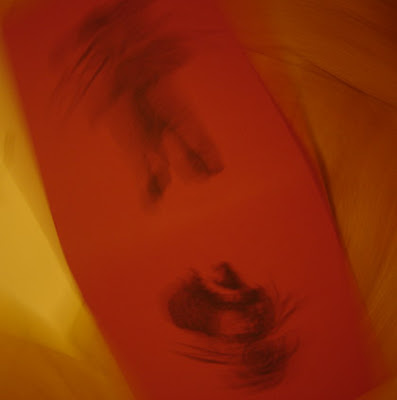 Think this is the very first vinyl adventure for Tanzprocesz (allied with Phase! and Absurd), and what a beauty it is.

Side one plunges you straight in, with a wicked bass driven churn from the Placenta boys. I recommend you spinning this one at a solemn 33 rather than the stated 45rpm, gives the tune an extra nauseous-ness, almost like it was continually falling off the edge of the world. Oh, this is a superb slice of Popeye action, even if some of those mad cubist shapes of previous releases have been smoothed off in favour of a slow and sinister choke of black tulip blooms. Further guitar action crawls its underbelly - all hooked fingers and twitchy knuckle skin to a moaning vox riding a top, giving out sour vibrations, then everything slams into a wall, crumbled innards forced into the brickwork …as if a boot had just crushed a cockroach.