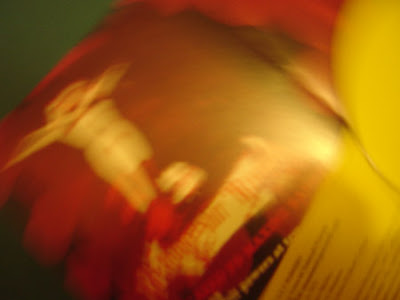 I really love electronic music, especially when it taps into the arcane… and this recent Abandon Ship release dedicated to 60’s witch Maxine Sanders, is the type of musick that makes me all tingly on the inside. Like Mount Vernon Arts Lab who channeled environments through their instruments towards a tangible connection to something that lies between realities... Telecult Powers, seem to be fellow diviners of those self same energies, believers in electro-occultism if you like, letting the environment trigger the sound’s flux (if the inlay is to be believed) as if it were spirit written…

Witchcraft 1972 is a short opener, all poltergeist electronica. A jumble of bizarre flutterings and scattered taps and bangs exiting down an fx spiral... like a séance of random firings, or the eerie beauty of something stumbling around. But the real meat of the album lies beyond this…

The second track, The Ecstatic Mother - is a bubbling drone of conflicting wet and dry textures, with flange ripples pulled on through… full of bass heavy permutations and Time Machines like stretches… odd signals eat at your consciousness, like a Brothers Quay tap-dancing nail… the margins going all frosty, as if startled… Boy, this is really excellent on the headphones, especially when all the envelopes start pushing up against each other and the batwings staple themselves down your spine in tazer like stitches. That forest of sine waves is toppling in multi vibrato fractions…counting, stretching backwards in sustain, then explosive release….screams of aching machine scribble, gyrating in ever tightening circles…scratches on glass.

The Starry Wisdom is like a half perceived message written on your bones…It’s bass rumble buries itself deep… the shape of a crooked hand forms, it’s shadow is transformed into a pack of skinny dogs… their flesh all flapping curtains, full of strange inconsistencies, mere suggestions that pull at you from every angle…leaving you hungry for details… But all that comes, are long tongues drawing in the sand, as the scooped bow waves continue to tug at you like an impatient child whose face has been misplaced or erased. Everything is oscillating, shifting around, a menace of shadows chills the air…a bell rings from an empty table, but you see only hand prints in the dust… I shut my eyes and my temples contract in a shiver that breaks on down through my body in a measured flood.

They save the best for last though - a real scary number, full of aggressive swirls of machine ghosts that leaves me convinced there’s something coming out of the speakers other than the sound… just like the time when the jaws of one of my drawings tried to eat me in my sleep... the intensity of this track is just superb, an unease that creeps all over you right up to the album's finish.
abandon ship records maxine sanders telecult powers