Totally Dad - Video for the Snake 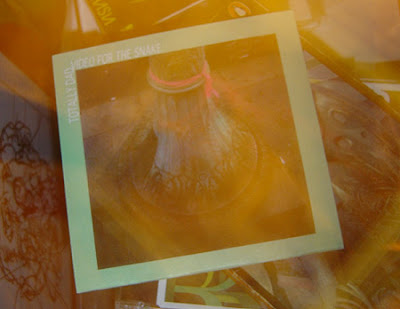 This is a fun spin… part comic / part genius… possessing that serious/tongue in cheek rosette the Thinking Feller Union Local used to champion (and probably still do)... musicians with a need to do something different with all the nagging musicianship...

The first track Miami Beach Futuri sets the scene with a mad n crumpled percussion, like somebody trying to play guitar with a saucepan … forced under a crazy little keyboard oscillation, or is that a medieval yazoo workout? – A really groovy number, full of malleable shapes…

The painted plate is a more contemplative slice of the Dad experience, a guitar cruise with the odd spanner in the fretwork… those detuned potions seeming to compliment, almost soften, all that django fingerwork … nice split stereo technique too, giving out a conversation-like vibe.

Camel coat is a great finger tapping tune, a jolly guitar gait scurrying round on a bendy blues washboard with secondaries keeping the time, allowing for some miniature explorations with a dusty glint of those Bagpuss mice…

For The Neighbors 2, the album is suddenly plunged into silence. Cranking up the volume, barely audible jazz flickers and piano clanks work themselves through the speaker’s diaphragm… Cagian preparings that gradually become loud enough to hear, only to be whipped clean away in a Clangers’ style guitar attack of Nothing Hurts. An angled assault in true jazz butchered mode, flurries of spiked excitement saturated in different guitar textures /flavours… electroplated, clean, warbling… almost as if cocking a hat to Arto’s no-wave anarchy.

Next up is Donis, a little keyboard interlude with sparky strings which launches the polka dotted Grape Kite, the guitar kicked-drum coda staggering around to keep it’s balance… a ludicrous jelly wobble of garbled and reversed scribble tubes… space invader circuits … slowing down to cymbal clashes, then speeding up into some fleeting picturesque contours… All leading you into a free rock freak finale that Gang Wizard would be proud to call their own…