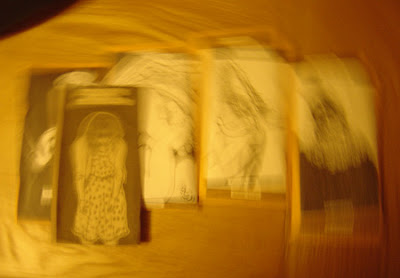 This series of beautifully packaged C10 cassettes from Ultra Bon Bon comes across all rage. Not the blind oblivion kind, but the scarier psychotic variety, that mulls over the feelings almost luxuriating in the darkened tastes... charging up a sticky claustrophobia of gristlized electronics, purpose built, to bend rhythm and hatchet out creepy noise teasers... delving deeper, focusing the power, before letting the fury flow out in a satisfying caustic spew … Full of contrast, like a filthy Xerox, the sounds here are economically honed for maximum effect, then torn through with an insane animalistic growl almost as if it’s a personal exorcism to let the light back in…

Horse Remixx is an exciting, jack booted hydraulic punch with whiffs of TG’s 'Discipline', until a chopped rhythmic vox is gaffa taped across it in giddy zig zag’s… Valve inserts weaving in and out of waves of seriously crippled keyboard … the keys throwing out a raspy infinitum.

Horse Faced starts with the mellow echo of jungle chatter and a bubbling drill then chilled panoramas that chasm dip. Everything’s all nervy, until the tension is released or obliterated by a scorching vox tidal wave …screams of 'Call me out of this Landddd' hack-sawing the air.

Pregnant - a machine pigeon’s coo, metallic pipes whistling all tubular between a slow creep that descends into forests of machine tool ambience and shortwave flutter….getting tangled up in a garbled riot of noisy colour like a blunted Brotzmann sax, swirling round a spinster’s skinny finger … A warble that’s literally drowned in confusion…

Fighting for his Wife is spitting electro pan fry of humming wing and biting insects bizarrely grafted to a mutant Peruvian discharge… Then a series of spectrumatic explosions, a chewed up vocal with wobbly spittle flying at diagonals, crawling out on a steam-fed ratchet. This sound is so fucked, it makes me laugh out loud!

Rich Black Soil is definitely my favourite, I can imagine this live, that wave of noise crashing through my chest. A filter twisted wreckage of pared down sonics skipping out a crippled dance. A blackened husk of a vocal, splatter caking the scene in bronchial tar…the perfect recipe for any wage slave morning.

My Disguise is a rippling vibrato mantra to high end crimping… I’m reading the inserts that go along with each cassette. The words ’my disguise has no holes for eyes, take pity on me… ‘ jump out as a buzzy mono-slab of vox cuts through a comb, backed by a 40 watt bulb chorus of cracked china harmonies like the whistling of glass Cicadas .This is less intense then the rest but possesses a suitably deranged hillbilly vibe…

Mountain Fears is a bassy rummage and plunging keyboard gobbled up in a crazy mash of teeth… bloody love the way those vocals are burrowing into the instruments.

So many (R)egrets is an equally mangled electronic junkyard of broken keys and banjo, cut-out in beaty bite sized potions. Overwritten by some delightful jaw collapsed candy. A mug of bloody fists and mascara framed eyes, a scream of salty tears crumbling like a tarmac of spent zippers.

Ultra Bon Bon’s DIY feel is so yummy, a hungry wolf wrapped in a lo-fi blanket, the edges all moth eaten… bleeding out authenticity. Apparently, they are a husband and wife duo living out their lives in a small town of Alberta in the wilds of Canada, whether this has any effect on the musical output is anybodies guess, maybe it’s mirroring all that picturesque vastness with an internal geography? I’ve no intention of pinning this noise butterfly down though, other than they’d love to harness the power of the train that passes their house everyday, something I’m certainly looking forward to hearing... 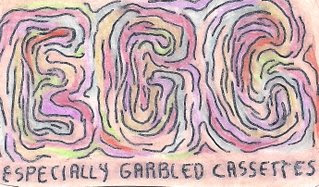