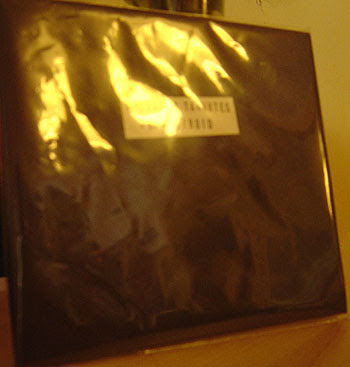 Culled from Tazartes own archives, this is like a global opera in which Henri Chopin has been reanimated by Bedouin tribes people. It manages to sound strangely nostalgic but simultaneously modern. It’s also incredibly addictive…the more times you listen, the more you have to relive the experience…

Housed in a jet-black digi pack, blank, apart from album title and label… no inlay, no track titles, nothing to distract from the contents... Mr. Tanz has spoilt us rotten with this first Tanzprocesz offering on proper CD…

Starting with a Kurt Schwitters domestic/submerged motorcycle splice, sonic mischief is rife during the whole 45 minute duration. The majority of it vocal…the sheer oddness of the sound fascinating; a muddle of influences that in anybody else’s hands would fail miserably, but here woven together with a collector’s mastery. Orchestrated loops pop into your head like a well trained flea circus… the leakage globe trotting between French, German or more Arabian flavours… Whether its a cut up tango swagger or leaky roof, accordion accompaniment … the whole thing flows with a beguiling grace.

There’s a magic moment when the sounds of tweeting birds seems to float on the plumes of a child’s inquisitiveness… and this isn’t an isolated incident either, the quality moments continually bursting open throughout, with a metamorphic quality, a duality of texture that is literally inspired …composed or just pure accident, it’s anybodies guess. In places, the whole thing seems to leave it’s body altogether and astral plane on a saffron cobra of pure hypnosis – a lush treachery of cracked throat varnish and drifting rumination.

I’m guessing there must be a treasure trove of unexplored gems hiding with the spiders in Tazartes’ Paris apartment that are just as remarkable, if not more so… begging for release… here’s hoping further supplements crawl towards the light.
ghedalia tazartes tanzprocesz