Posted by Cloudboy on April 19, 2009
Went to see Bat for Lashes last Wednesday, just me and Sarah, we had the best of times considering I was a little bit apprehensive due to the new album’s super gloss.

The Anson Rooms were bloody boiling, the extractors only seemed to shift the heat downwards… don’t think I’ve been there since the Tindersticks… seemed bigger somehow … packed in like sardines we were… thankfully no fainting was on the cards… 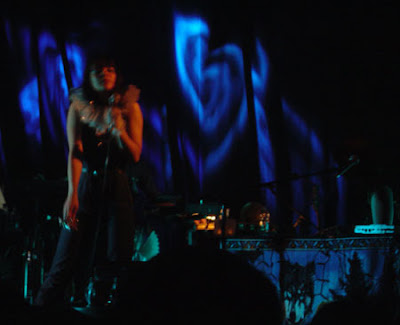 Natasha was boiler suited up with a white ruff round her neck, the sound souped up and powerful, skating into rave territory in places… plenty of first album reminders during the set, which delighted the karaoke crowd… in fact, the sound was pretty amazing, not exciting my usual psychic ills, more massaging my pop crackle n pop…

The stage was full of fibre optic angels, burlesque lamps and staring animal heads while the tunes unfolded, the girl from Ash was carving up the guitar… somebody else added shifting modulations, and my goodness, drums that were all frozen meat crash…

She spoilt us with two versions of Daniel … that lo-fi beat box version, a million miles better than the radio friendly smooth-a-thon… and it’s not often you get two encores; one almost as long as the first set!

They were supported by Caroline Weeks, who was a folksy pleasure, full of introspective malaise, Edna St Vincent Millay poetry set to sparse acoustics. The other band being School of Seven Bells, a great female led vox /pop, beat box driven affair of guitar and layered synth-lines who some people are comparing to the Cocteau Twins for some reason?