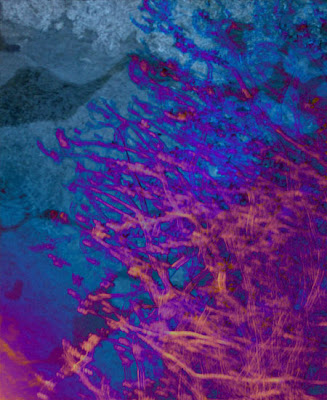 Like the tonal landslides of James Ferraro, but straight in there with the goods, there's plenty of psychic torque in the abrasion, Joey's trademark phantoms, EVP whorls and crammed misalignments feeding your head with their otherworldly glow. The primitive lustres therein, unfurling like the Kali arms of some exasperated ecstasy, transmitting a multi-layered noise a kin to those occultist explorations Boyd Rice used to favour before he got all wordy. The experience, an intense but strangely jubilant one that has you clinging to super-glued keyboards (Zodiac Toys-esque), or reeling from incisory and scorched totem.... repeated immersions unlocking new impressions over its forty eight minutes...corrosion for our gloss obsessed age.
joey chainsaw