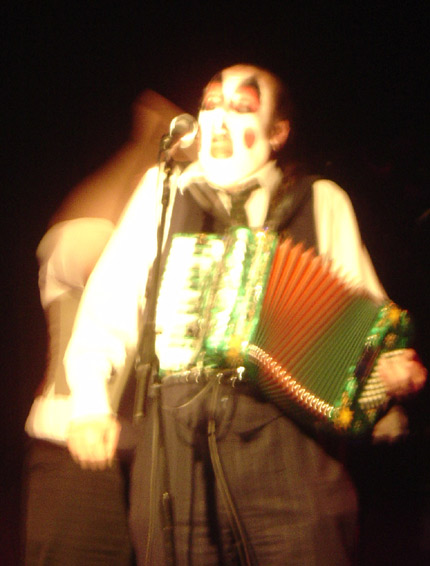 With mouth and eyes glowing Lucifer red, the front man sang tales of bitter-sweet comedy with a high body count. The abundant tunes sometimes ran rapid or sank into sultry Parisian type ditties that burned like slow decomposition under the jade lighting. The sinister front man, with a keen alto voice, took up piano / accordion duties. He was ably backed by double-bass, musical saw and a jolly fall-guy behind a child's rickety drum-kit.

Plenty of laughter ensued , The Crap Song was a particular high point, with the one about Banging in the nails (especially for any devoted Christian types in attendance), being a riot of Pythonesque proportions… the drummer's kit strewn around his feet as he flailed it to death with crazy plastic hammers… squeezing tears of laughter from the hugely appreciative audience. The Weeping Chandelier was a strange ballad… a lonely girl befriending acrobatic bats, knitting them sweaters as they danced amongst the stars, living in a dump then marrying royalty... one by one, each of the accumulated characters coming to very grisly ends with the girl finally dying of a broken heart.

All in all, there was a pleasant feeling of inclusion between performers and crowd, as if everybody there was in on a wild series of gags to which the rest of the outside world was simply oblivious. Hugely recommended especially if you’re of a melancholic disposition or a touch suicidal.
tiger lillies