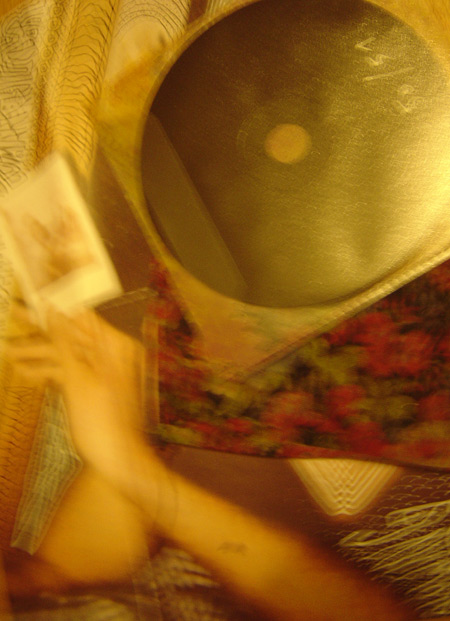 A train is clickety clacking through those amp modulated cracks... the thump of tin drums … hooves on the cattle rail…. pictures of one armed drummer boys…

The tea has this subtle perfumed vibe, cutting through the density… seeping out on a slow evaporation, dull hooks give out muffled signals as if hungry wolves are smiling behind woolly hides. An assemblage of abstracts, glass eyed gleam… The amp is pissing out bad TV receptions and shaking dentures. Symbols shovelling their way in, the butchered, stitching together in zig-zags. The strange lights of old Europe bending in deviant climax, chewing over suspended dirt. This primitive Neue Welles Deutschland motif hits, accompanied by clattering mattress strings and haunted metal…. The dynamics are beautifully ramshackled, the cymbal shivers giving it an insane Krishna overdrive… hail hitting home.

Track two is a more subdued affair, preparing you for the torn fruit of the final instalment where everything is blown to fuck. Wrapped in this feedback miasma, odd sounds warp, make a break for it. Those fast forward funk warbles are delicious, whilst a mumbled narration dribbles out from deep in the mix. The textures here have a disturbed life force, twisting chalk torsos caught in nitrate shadows... an insomniac beauty … collecting its own injuries in the scream of exhaustion. Some loose jazz chord-age slips around…elastic nose dives and pitch shifted ruminations are handkerchief wrapped right up to the cut off…

Cloudboy said…
i'm getting more of that tea, the perfect accompaniment...
Thursday, May 27, 2010