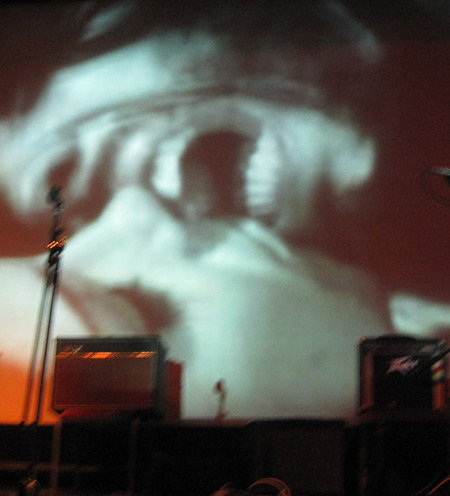 Hay fever was hitting pretty bad, nose explosions on the way across the M4, Peggy Suicide playing loud n proud, the lanes practically deserted due to the England game... Joe n me happy we were avoiding all that shurrazz... Dodgy air conditioning making the car a sweatbox...

Got there in plenty of time... the Singing Knives posse were still munching through BBQ sausage and burgers, so decided to wander Stokes for a bit... ah the sunshine, I've missed yr too long.... bumped into Team Brick who was full of DIY tee tips... then got all disappointed that the Croft didn't sell records anymore...where did those Crisis gems go... The Here shop provided plenty of twisted entertainment though... my sneezing echoing the basement galleries' walls... 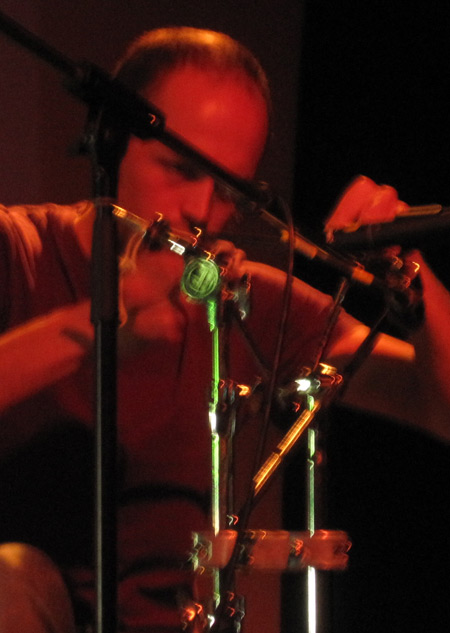 Back at the Cube things had got off to a really cool start... Ross Parfitt was repeatedly banging the top bar of a triangle, creating a little toffee hammer resonance... a metallic ring that fed back on itself...small changes in the beat transformed themselves into a sequenced melody, pitting in peaking spurs... clean and cerebral ... apparently it was a Lucier piece, the name of which I've completely forgot....

Next up were screenings of people who sadly couldn't make the night, amongst them a storming set by The Family Elan filmed in some local pub, and a spellbound Steffen Basho Junghans performance, where the twang of his 12 string was offset with a myriad of watery patterns... warming you up for what was to come... 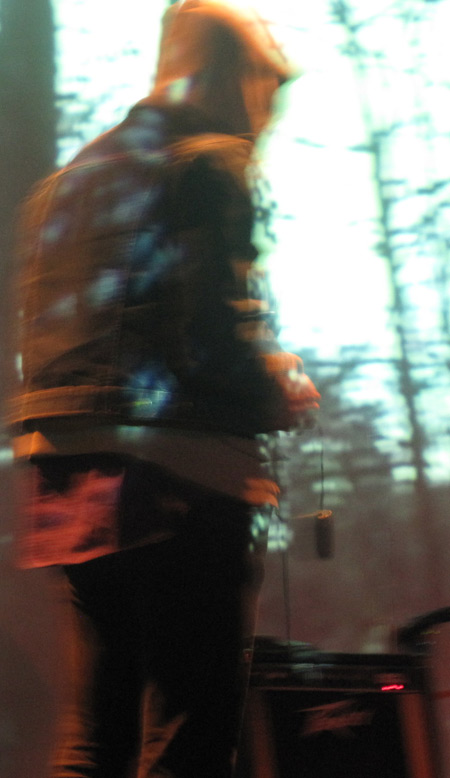 Infinite Light dabbled with radio interference, wandering the stage remotely switching the reception, a woodland walk projected on screen, the audio sounding like he was crunching leaves under foot... a greasy loop echoing every now and then with Lynchian disquiet... 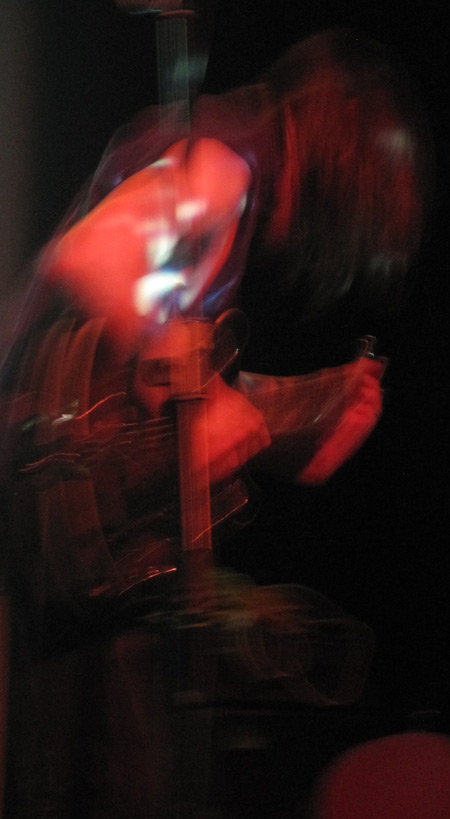 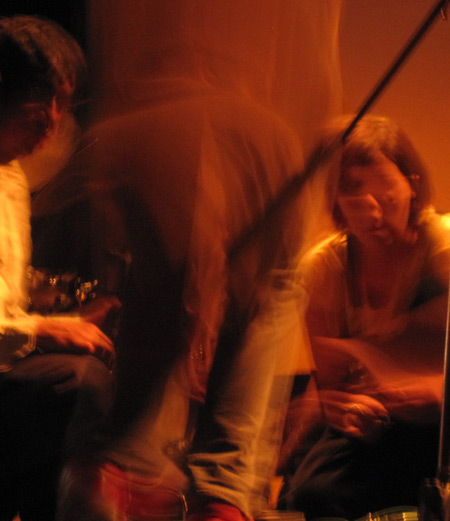 Hunter Gracchus carried the high, the miasma they created, pure inspiration... a complete blur of activity... 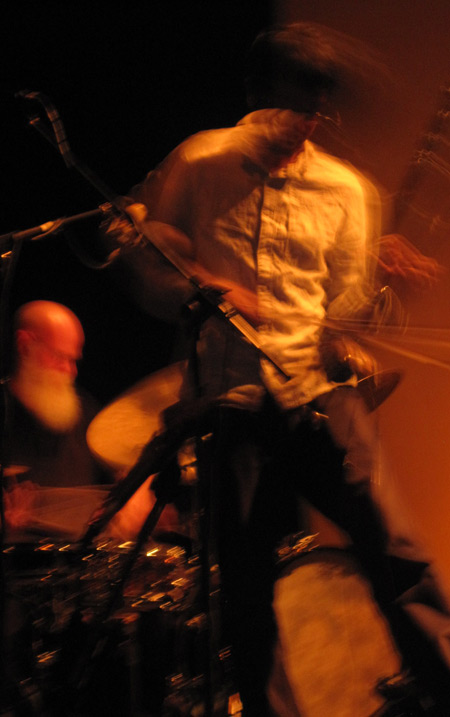 couldn't work out who was doing what, but the sounds were frighteningly original, It looked like Fiona was playing a slashed inner tube as a flute... Not the gamelan eastern jam I was expecting, more of an alchemic free for all that fed off itself and shat it's guts in rainbow showers, clattering swirls of sensory overload that seemed to be pleasantly underpinned with a non-jarring vibe, unusual and utterly unique ... 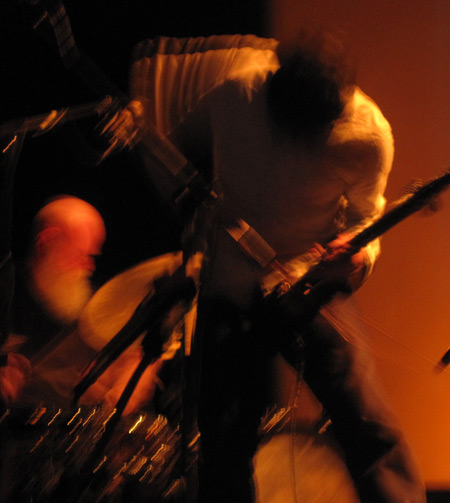 no exaggeration... this was incredible stuff..... worth the admission charge alone, glad paul made it in time to catch the action... 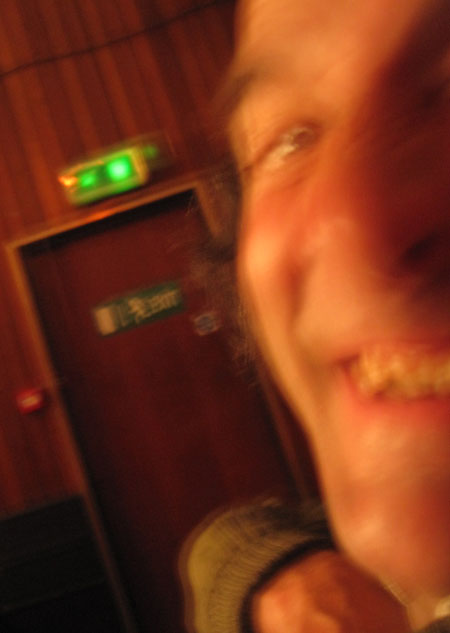 The Harappian Night films that came next did my head in, I think if the garbled pace hadn't slowed, I would've had to calm down outside ... even if ironically, I thought they were bloody marvellous......

bizarre OCD horror movies, images assaulting your eyes like a magnified Angers 'Demon Brother', the continuity a jumble of conflicting sensations... the souped up, ramshackled Ganges vibe of the audio making things worse... in prep for Chora