Flaming Dragons of Middle Earth - The Seed of Contempt 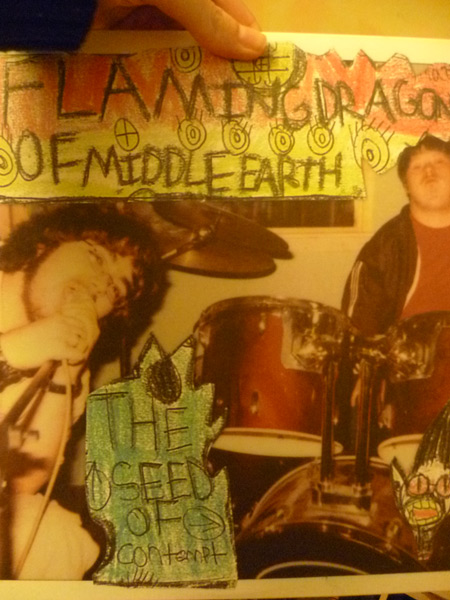 'I’m in a wheelchair, I have muscular dystrophy... and I'm a lead singer, singing apocalyptic improvisation lyrics' barks Danny Cruz the self professed leader behind the Flaming Dragons of Middle Earth... He comes across like Tiny Tim’s aggressive twin, while his collection of non musicians throw out some suitably off key harmonics around him, like an audio equivalent to the wicked crayoned artwork that houses this baby. 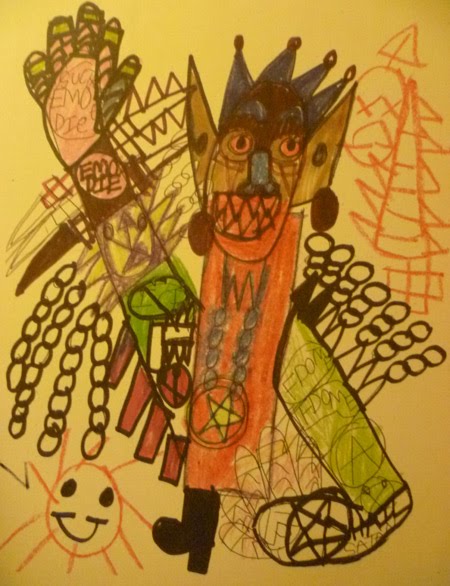 This freeform rabble is not to everybody's taste… his 'off the cuff', 'in your face' jabbering takes some getting used to... sounding not unlike Zed from Police Academy... And it's not until the first side hits the 13 minute mark that the albums' outsider promise really begins to shine in the form of a lovingly realised freak-folk ballad I think is called Shadow of the night ... A low-key Comus thumble of Beefheartean hints carried on a ram shackled melody almost picked bare and gently swept up by wisps of trumpet... a dog barks along, the phone goes off... all seamlessly absorbed into the flickering splendour... 'hate myself today...' whines Danny...blood in my eyeballs...' 'heart half arachnal...'

From here on, the record never looks back, further pushed home by Evil knows your name... a banjo and spoons peel with an orphaned synth line weaving greasy smears...

The second side relives the experience, with a piano nailing that overbearing vox... Later on, they totally slaughter Lennon’s Power to the People to great effect... ends up a million times better than the original... builds up a lunatic energy from the jarring guitars and misaligned drum flurries … repetition giving way to an insane shrillness that would no doubt leave Simon Cowell in a coma of disbelief.

There should be more of this in music, doing it for the sheer hell of it... messing with the salesmen and connoisseurs tiny worldview, unafraid of that crippling notion of uncool ... un-tutored, gutsy, it must be said there's a whole heap of musical wrongness on this slab of vinyl but enough oblique beauty to make it a worthwhile investment...