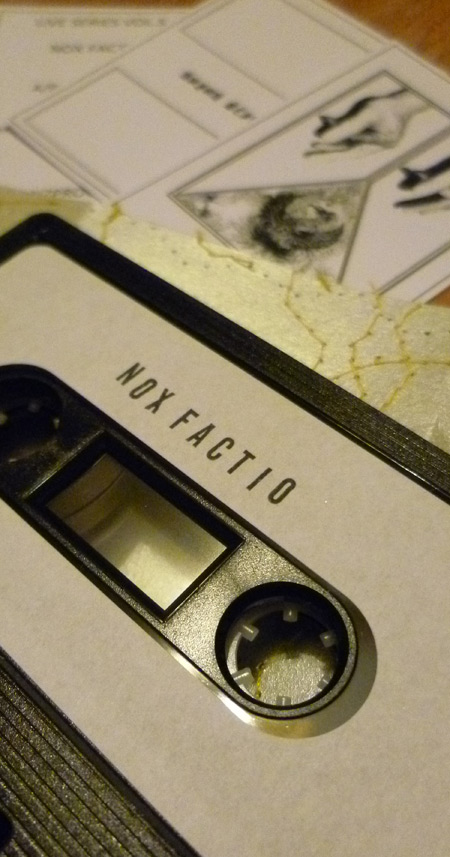 Nox Factio are Andrés Ramirez & Elise Vandewalle, a duo who seem to favour the conceptual and mysterious by the looks of their sleek homesite, but this live document definitely plumbs more visceral pleasures.

A broody drone bone synth starts proceedings, the hue a weighty new wave cauterised in ribbony splashes. The odd scorching cleaver stopping everything from getting too generic as they chaffe against the souped up brew…

So far, it’s ticking my boxes completely… but when the sound’s fisted in some wildly distorted yelling, it’s taken to a whole new level. The vox is superb - bleeding a true Niagara. The cat looks on, more than a bit disturbed as I revel in the industrial bleakness of it all...

A satisfaction quickly hijacked by a corroded techno... the beats like Nizer Ebb, but way more steroid and edgy. The chasms, spanned by more demonic throat action... this is premium stuff, a real booted rave-a-thon that descends into some lovely Kristallnacht crunch. The vibe getting all rhythmic, bringing on Test Dept comparisons... which is never a bad thing…only for the intensity to die out on a ration of delayed vox vapour and rumbling deformity...

But this tape isn't bowing out just yet as dry beats kick on through the expected fade out, trashing around in muddy puddles... followed by whip kissed tinfoil and plenty more vocal thuggery... In a word, excellent!