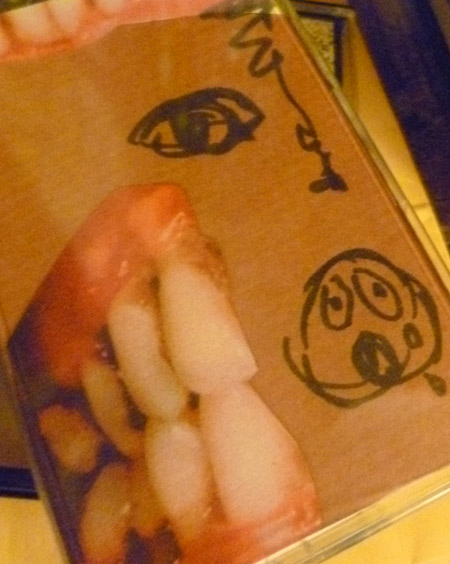 The A side's like a re-imagining of Alan's psychedelic breakfast from the Floyd's Atom Heart. The beginning, a kitchen draw rummage of sound sources, which slither nicely into a novel series of loops, blends and spectacular blurs... getting all excitable, at points becoming a Heath Robinson compendium of spoke filled vampire bats and mangled metallics. The whirr upping the noise stakes, filling my lugholes with some exceptional splices of chaotic wizardry... periodically stripped back to bare bones before being sent off on further noise filled excursions. This is a slip-sliding wonky affair, that's a captivating blend of circuit bent shapes and retarded dinosaur groans... The clanking and clattering piling up on an array of bruised and battered multiples, ending on a hushed almost catatonic loop of what sounds like a barking toy dog slowed to an eerie dirge... as tiny synth curls permeate the gloom, further illuminated by iridescent wisps, whilst the drip of digital stalactites and that ghostly touch of asthma increase the spinal chills.

The flip secretes a more subdued vibe... understated, almost nihilistic in its starkness… The vibe similar to the coded dialogue of short/long wave radio transmissions … or a delve into the ‘no input’ mixer void… Glitch skipping Morse mixed with pocket rifled flurries of contact mic(ed) debris, felt fingers and the electro-static rip of interference… Later, the undulating whirr of distant motors can be heard ticking over in varying percussive purrs, with sine wave modulations skating across warpy irregularities… finally humming out on a blunt conclusion.

An excellent slice of electroacoustics available from Hissing Frames