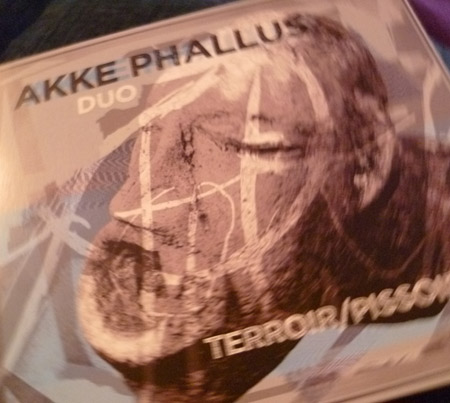 Made up of one half Hunter Gracchus the other Chora, The Akke Phallus Duo are certainly no strangers to stoking up the noise, and I'm glad to report neither show any signs of mellowing any time soon, as this debut release testifies. Terroir Pissoir brims with those self same wild fidelities and bizarrely refreshing dynamics that I've come to love from this duo's other incarnations... each track here being an inventive springboard of raw and colliding textures, a sound lab of conflict, adhesion and impossible futures... a truly exciting ride that gives your mind a good workout.

The first track Futhorcs Meat Contorts plunges you into the deep end, swamped in jack plug ugly and abrasive semaphore, skidding around on rubber burnt concretes. Grabs you by the throat at first with its primitive onslaught... a torment that soon relaxes into a series of hushed sheet metal percussives that contrast nicely with the wet sounds of somebody relieving themselves in a metallic urinal (a cheeky nod to the album title maybe).

This is a masterfully mixed affair as the track slips from reverberating tunnels into Congolese bubblings on the smudges of spinning coins, a real depth to the sounds too... that weave of ethnic tempos bringing to mind the judder of Javanese shadow puppets... Easing you back into noisier climes with jolts of rough vocal caustics... sounding like the dragging of heavy furniture across varnished floors... becoming aqua-lunged pellets and Moorish disfigurements, later drowned in peels of church bells and a multitude of squeaky wheeled shopping trolleys...

The label info states that the album results were gleamed from improv material gathered from as far afield as Italy, Croatia and Peckham. Sounds like they might have journeyed to some Islamic states too if that mentally disturbed pile-up of Bid'ah is anything to go by ... and I'm secretly hoping the numb subterranean clamber of Pipes is in fact the sonic results of slamming about in that upturned US military tank...

The best track for me though, must be the eerie ritualised thud of Bacchus Frolicking in the Snow … a feast of fluttering electronics and paracetamol crumble... like those shortwave receivers on K11's Voices from Thelema that picked up the ghostly goings on in Crowley's ruined abbey, these stark sounds strike your mind with the same strange illumination… a sense that something else is skulking the electro-static surf in a swirl of growling exhales… I’m truly loving this, it’s tensile, brooding... eats up the shingle shore in decaying bleeps n splutters, sort of lingers… gets you looking over your shoulder nervously…

...An experience that is exiled by the banshee ear scrape of Dulugu Ganalan which eventually finds its own distorted equilibrium in garbled repetition… leading to the albums finale Clather a soothing ocean wave of broken ethnicity. A repeated thumb piano refrain on sinister(ish) vocal vestals, chasing reflections of itself... getting more uneasy with every continuing shift… this album is something else…