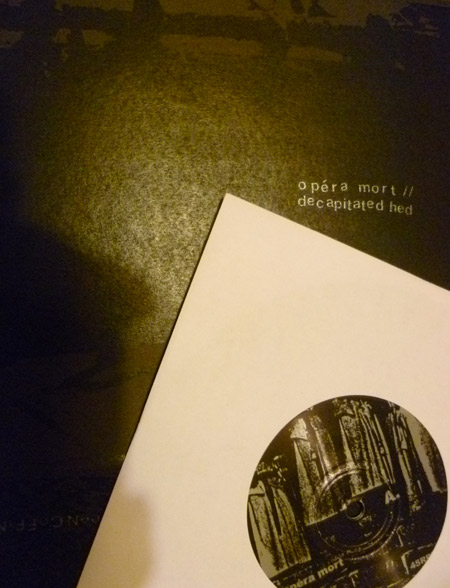 This is a cool offering from Spleen Coffin, a 7inch split between Opera Mort and Decapitated Hed … The artwork, a dark, brooding wrap-around affair, screen-printed black on paramilitary brown with Xerox abstractions barely poking themselves through, goes some way to describe the machine age voodoo it contains…

Midnight Coffin, the Opera Mort side, is a live recording of corroded cobra curls and pulsing wrongness from their 2010 jaunt stateside…. As ever, it’s a glorious slice of chloroformed techno full of pitch whorls and valvey exchanges. Real creepy stuff with El-g’s distinctive moaning leaking from beneath the loopage… His wire wool mouth, saliva dripping counter cut-up’s, murmurs, all bowing out on an hypnotic groove that I happily left for a full two minutes before I realised it was eternally locked…

The Decapitated Hed side Zereo Zone, also recorded live, complements Opera Mort’s contribution totally in a mechanized stomp of pitchfuckery and hydraulic slap… kind of more danceable than the Rohypnolised vibes the Opera Mort boys plied, that’s until that robotic thump is dispensed with and your melon is twisted further with some classic valve burn…