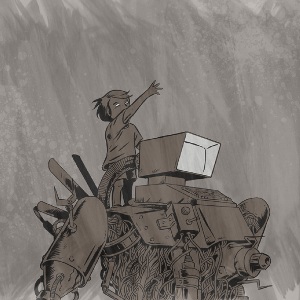 This is bonkers, and without doubt one of the best in this series so far… a wonderfully surreal jig-a-thon of chopped source materials… a peculiar beast, of bent, filtered and thoroughly jittery phonics… The tubey brain fodder of the first track Dilligence is a Fish a mischievous play of percussive cut ins, a wash with Max Headroom automata and channel flipping distractions... It sets the benchmark for the tracks that follow in a tight klankenhaus of loopage... giving you a bad head day of circular-sawed trapeze... that ends in glistening gong molestations…

Next up Eruption of the 106, quickly fills the void with backward glances and piano nails… eerie Sapphire n Steel territories marred by a seizure of burping robotics… then catapulted back into some beautifully fried Louis and Bebe Barron space-age shirazzz… some other glassy salvations leaking briefly through before cutting to piano/vocal hiccups overcome by further robotic indigestions ...

By the third track, the hilariously entitled Parliamentary Crampons, The Lord plumbs for a drum n bassed sledge ride, that seems fixated on West Norwood Cassette Library's previous dancabilities, but quickly unravels them in favour of a tunnelled 'waaaah' and low slung battle of cross-edited highlights... until it's completely hijacked by a Smash get Smashed alien interlude that's intent on re-immersing you in a giddy groove of musical chairs....

Everything finally bows out with Reducing the Past a generous squeeze of agitations… a What a Day parody that gleefully goofs out on repetitions of itself, like a hall of mirrors reflecting ever briefer time-spans …. Strange linguistical out pourings mashing away in your mind… suck eggs , so gin(less), sir(slur) guinness... word transformations on a Star Trek door malfunction that saharas itself over some distant dune...