Derek Jarman's Super 8 Journey to Avebury started the proceedings... The Myrninerest's score superbly evocative as the screen glowed golden and the warm grey of ancient stone jutted the skyline... the instrumentals gently slipped away as frames were bathed in the lightest of breezes. 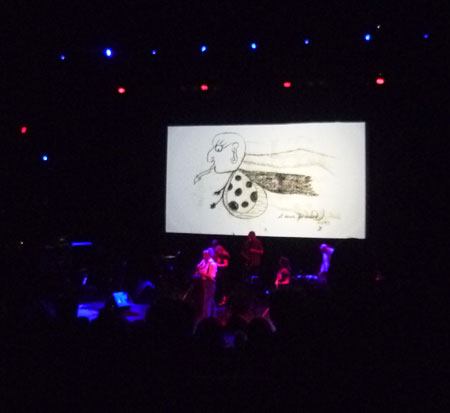 Tibet's new collective followed quickly after, with a highly personal set dedicated to his dead friend and Coil member John (Jhonn) Balance... Right from the offset, Jhonn, Uttered Babylon's mood was a resolutely sombre one, quite uncomfortable to witness in places... felt like you were a voyeuristic intrusion ....Tibet throwing all his personal mythology into the loss... his Louis Wain, toy town obsessions, recent Coptic biblical struggles, helicopter angels from his own 'near death' experiences combined with many more cryptic kernels... Words falling over each other, slipping by almost too fast, the usual C93 mix of childlike innocence and sourness mingling with plenty of ridiculous collisions. You've got to admire a singer who uses the words 'haunted winkies...' with such artistic conviction. Mr Blackshaw's guitar provided the musical fervour, a bucolic setting of lilting melody for Tibet's words to leap around in... Myrninerest ranks further swelled by Andrew Liles on electronics and surprise drums, Comus Bobbie Watson on backing vocals / harmonium and finally Aloma Ruiz Boada bowing those violin sinews... This was a highly personal requiem indeed. The projections behind flowing from warped child faces to young adulthoods... Balance sitting in an armchair, flies crawling over the contours of his clothing, the camera drifting upwards towards a grinning face. Elsewhere, maggot like ripples in the blacks and colours of his paintings... wilting blooms... a rather magical blossom falling around a statue of Pan to the beautiful inflections of 'Catnip Pastures'...Tibet finally backing off on the embers of the last song to wipe his tears away.

After a short interval a disturbed trio of Jarman films followed, impeccably scored by Cyclobe... Sulphur, the first in the series, was an eerie montage of Art of Mirrors and In The Shadow Of The Sun. A brilliant melt of haunted figures and flashing palms, morphing almost insidiously with their arcane slither of electronics. The next film, Tarot, I'd never seen before...no doubt a homage to Kenneth Angers filmmaking with all those occult theatrics ... that slow creep of crooked melody accompanying it, as a half naked body is caressed then strangled... In the last offering, Garden of Luxor, the gaunt man whipping flowers was really odd, the film’s grain making him appear apelike as berry blood stains slipped the screen... lips sucking fruit in a gush of Egyptian iconography. 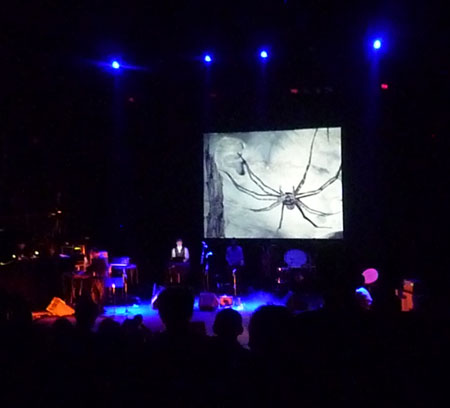 Finally, the night's zenith, Cyclobe. They just dazzled. A surprisingly original blend of ancient run through with alchemic twists of modernity... How Acla Disappeared From Earth from their recent Wounded Galaxies LP, heralding a set that bristled with dark energy and astonishing lucidity as a cavalcade of chemical ripples and strange sciences paraded the screen. The live drums thundering, as the rub of the hurdy gurdy jetted into the electronic streams... Bladder pipes zigzagging the tear of processed meat and shrill discordance... that interlocked hypnosis biting at your ear with hallucinatory decadence ... The live version of The Moths Of Pre-Sleep like a war chant for lost times - literally had me on the edge of my seat... This year's Meltdown curator Antony Hegarty even stepped in to provide some gentle cooing to the swirling repetitions of all assembled. The projected moon on screen eerily shifting focus... there was even a Tudor-esque flurry of woodwind that was just awe inspiring... 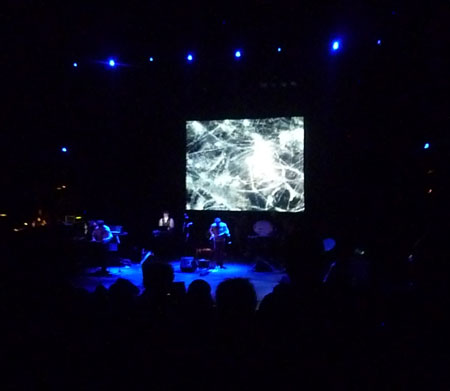 If their new material is as good as this, you're in for one hell of a treat...