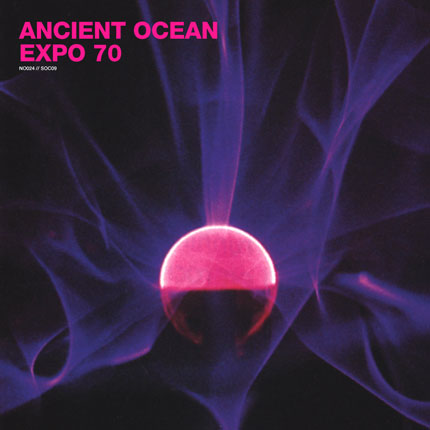 Ancient Ocean's side - Decomposition // Decay is a sublime procession of pulsating texture, a hazing of the subconscious. Electron false colours filled with droplets of distended keystrokes and singing bowl reverberations. Mellow actions of dronic love unravelling in zero gravities, punctured in a un-tethering of romantic glisten … Aural drama, magnified in a gorgeous acidic pour of guitar… a starlit gargantuan of fizzing expectation amongst the neurological vapours… a chemical ascension on gliss-kissed guitar lay lines and veiny spiders of nocturne, inching root balls clouded in carouselled confetti's…

The flipside from Expo 70, aptly entitled Waves in Caverns of Air, ekes out a darkened Dali-esque drone that’s perspectively thrown, real minimal fare with oscillatory owl whorls, puckering those ever expanding vanishing points as if Delia Derbyshire was remixing from beyond… Highlights falling through the ethereal cloak in a twist of shadow, relayed on a chorus of mirrored satellites … keyboard blurs gluing the interferences together into a vaselined airbrush of orbiting spacecraft, oozing the repeated rrrr’s of relaxation, seemingly caught between those ultra violet hues of the cover. Another sterling release from No-Fi...