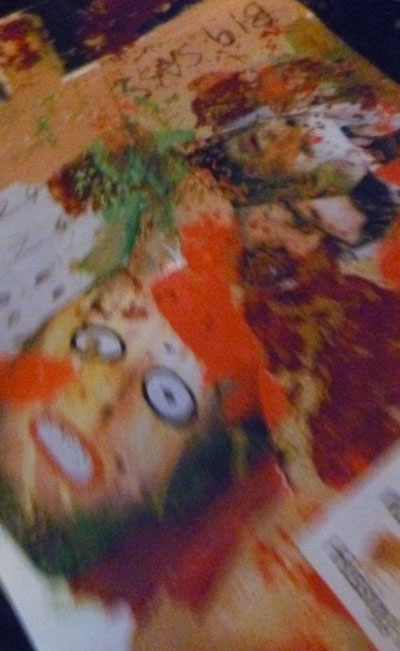 Straight from Mr Shackleton's very own imprint Hissing Frames comes this new gem of a cassette... A 'weirded out' weave whose 'house style' diy paint splattered collaged cover gives an inkling into the delights that it contains...

Robbie's side is surfing the short / long wave candy on the harsher side of the spectrum ... This is noise with a wide heart and an agitated attention span, crammed with lo-fi immediacy that's resourcefully emotive ...Those gorgeously evil mechanical repetitions and warped tape graylings buckled in swoons of opera and garbled fwd/rewinds fill your head with possibilities. 'You'll never catch me copper,' he goes, all beat boxed mouthed, bedded down on an awkward wobble of operas and baked vocal guitars which soon break into a stunning avant be-bop chop. A funkadelic syncopation of human tone bank that puts that Police Academy chap to shame...so darn additive it's unreal! It's like he's channelling Elvis or Prince with a taint of Alan Vega into some homemade cabaret/karaoke... Total gold!... Even when folded back into noise, a stream of ugly and beautiful truths can still be heard wasp vowelling the speakers...

The action doesn't stop there, as the phenomenon that is The Kommissar Hjuler Und Frau occupies the flip. A pick-up zammed 'blues' of fretboard, as Miss Frau 'ahhhs' away over the top, high on the vocal register to Hjuler's low slung baritonics. It's like a rewriting of a Miles Davies milestone, the trumpet replaced by an off kilter nightingale plying an 'anti-X-Factor ' bezazz, like a Billie Holiday deconstruction of tonsil tinnitus .... gliding maleness sweeping in... beaten chord candy and tasty feedback peaks... Business as usual from this lovable German couple, even dropping off a song or two along the way...I absolutely love those screaming primitivisms, maybe not as brutal as past ventures, but this is still comfortably beaming from the outsider realm with Hjuler' word whoofing over the shrieks, on plastic spooned porcupines. Later on, Miss Frau throwing out the trance magic, goofing off her own coo-ing to glitchy pita pat of guitar... A Slapp Happy vocal climb prelude to some sellotaped poetry about taking the child over the mountain... a random sentence that has a strange logic of its own, to a cleave of bongo palmed shoebox elastic and Patty Waters tone tennis......