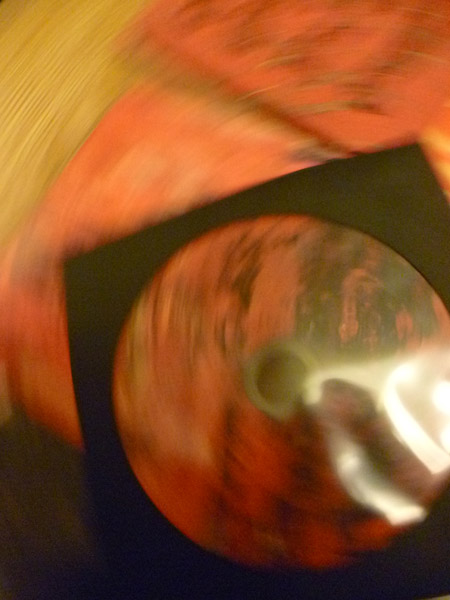 Here Thossian Process (aka Tim Mitchell) presents seven tracks of disembodied abstraction … a nocturnal firmament teeming with phantomised insects... transparent bodies that are used to the barest of illumination. A suspension of flash-lit digital dust, semi opaque mysteries that I imagine, fit well with a journey through the ruined environments documented in the inlay. The blackness carving anxious fallouts to these shrill fractals of Circles Burning. The coo-ing pigeon roots placing doubts in perception, as the spray of oily loplop feathers are tangled in a choke of ivy, modulations mingling with the smell of damp earth and moulding concrete... Machine born vocabularies shadow playing the watery timbers and rumble.

A negligee of neglect, October mass is all sinewave serpentia... devotional tones blighted in bubbling of liquidised tremor... as a lone shaman rattles out safe passage, seemingly holding the arterial shiver of light against a lake of glistening black coils…

Eastern Sunset is a pure blood fell horizon of cobra sonics, a kazooed mainline splatter of tentacles… and abrasive counter directions... whereas Strange masks… unravels more hypnotically as a firefly of magical metallics flap the speaker's diaphragm, and swarming mirror fragments are threaded on the starkest of numbed percussion…

Slum Hymn is my favourite… whirring, coupled with a masticated plod… a murmuring breeze of chant, affixed to an Assyrian undulation which soaks into you as more and more camouflaged details betray themselves... before Coma of Sunday eloquently ends the audio excursion in a slow displacement of algae… a soup of camen uncertainties… echoes of subterranean manatees or watery owls… vapour vends that linger...