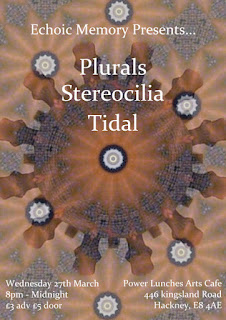 
Plurals
"When not invoking ill founded proximity wrath or witnessing jarring accidents unfurl from within haphazard and forgotten narratives, this scattered collective of fuck heads elevate freeform drone explorations into a crunching gush of stratospheric ecstasy."

Stereocilia
"Stereocilia is London based guitarist and sound artist, John Scott. John uses his guitar and live looping techniques to create dense, rich layers of sound. Over the past 10 years John has performed all over the UK and Europe with various projects. He has also presented work for live radio broadcasts, and soundtracks to short films. Last year he was chosen to perform with 100 guitarists for the UK debut of Rhys Chatham's, 'A Crimson Grail' at the Anglican Cathedral in Liverpool for the Biennial festival."
www.soundcloud.com/stereociliamusic-1

Tidal
"Jimmy Billingham's Tidal project has released music on various labels on the underground synth scene over the past few years, mainly on tape but also making his vinyl debut on Aguirre Records last year, with a debut solo LP coming later this year on Further Records. Jimmy toured Europe in 2012, as well as starting his own label, Sunk Series. One of a number of projects (others include Venn Rain and Journey of Mind), it is with Tidal that Jimmy uses synths, samples and fx to conjure up aural vistas of blissful sonic abandon – melodic, chaotic, deep and textured."
http://tidal.bandcamp.com/