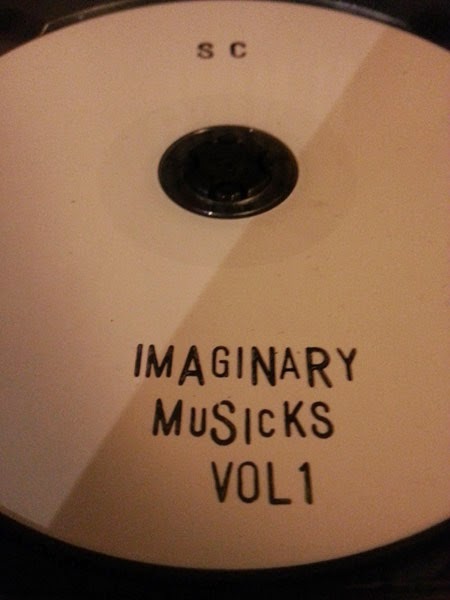 There's an alchemic quality to the sounds here; a warmth that curls your ear in smoky drifts of distant lands, deviational tongues. The serpentine flute, the mantra worn circles seem to fire-walk the tissue paper of consciousness, exacting a treasury of mellow magics. A parade of shifting focuses that conjure, dislocate on the burring rheumatism of drone. A painterly mirage of slipping multiples and fading memories, nomadic impressions of place lisping on prism caught thermals of the orient.

From the offing, Ancient chant touchstones a wavering dream of Eastern Europe embroidered in Bulgarian voices and flute... whereas The Way of the Unborn prefers to divine the remoteness of some Tibetan temple in the throes of ritualised repeats, filling your head with incessant prayers wrapped in reverberations of Aeolian metal and goatskin beats.

Imaginary Musicks casts quite a spell, lantern glows your head in a soft and seductive purr. I’m particularly partial to the de-tempo(ed) beat-box charms of Spirits of the Phonograph Era with that gospel preacher séance treading low in the mix, dealing out a shiver of subliminal pleasures. The reverse goods of Walpurgis Night are a musique concrete delight too, their planktonised slurs plying a plentiful array of strange curvatures that would leave Pierre Schaeffer green with envy.

If you’ve ever checked any of Stuart's live performances, and I strongly recommend you do, you’ll love the brain teasing whirr of The Eternal with its slipping fragments of tape curling the symphonic / jazzy goods, a lapis laided Shinro Ohtake of plunder-tronic dexterity, ending (for this album at least) on the picturesque Cantonese sunset of Floating World, withering away on zither and insect filled dunes. Beautiful stuff that deserves plenty of replays.